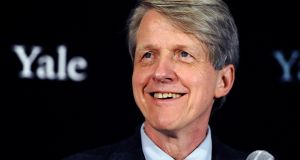 A record number of fund managers reckon global equities are overvalued, but they’re still loading up on stocks. Merrill Lynch’s latest monthly fund manager survey will worry contrarians on the lookout for signs of irrational exuberance. Despite viewing equities as overvalued, a record number are taking above-normal levels of risk. Fewer investors are seeking protection against market falls, despite this being the first year in the MSCI World Index’s 30-year history that stocks have risen every single month. Cash levels have fallen to their lowest level in four years. Merrill’s surveys, long viewed as a contrarian goldmine, show fund managers just don’t seem to learn. At the major market bottom in March 2009, they correctly identified equities as undervalued but nevertheless continued to underweight them. Similarly, at the peak of the dotcom bubble, the consensus was equities were overvalued, but they kept on buying.

The same pattern is playing out today: yes, stocks are overvalued, but no one thinks the good times will end any time soon, with a record number betting the ideal “Goldilocks” economic scenario – above-average growth, below-average inflation – will persist. Of course, it might persist. If things take an unexpected turn for the worst, however, then rising risk-taking suggest all too many fund managers will be badly caught off guard – again.

European equities last week suffered their longest losing streak of the year, falling seven days in a row before arresting the slide last Thursday. A cause for panic? Hardly – 2017 has been a good year for European indices and a healthy pullback was, many analysts noted, overdue. Still, Europe has lagged the US over the last six months and Merrill’s aforementioned sentiment survey suggests it may continue to underperform. Quite simply, sentiment remains too bullish.

Exposure to European equities remains well above historical norms, while European fund managers are holding less cash than their global counterparts. Fat Pitch blogger Urban Carmel points out managers were “excessively overweight” European stocks in 2015-16. Europe underperformed during that period, but that changed in July 2016, when fund managers finally underweighted the region for the first time in three years.

It’s easier to outperform when expectations are low, but sentiment once again became heady as 2017 progressed. In June, Stocktake cautioned that excessive exposure towards Europe meant it was at risk of underperforming, and that remains true today.

Fund managers’ positioning in US equities versus Europe is among the lowest in the last decade, notes Carmel, and this lopsided positioning means Europe may continue to lag the US in coming months.

Dead calm persists in US markets

The S&P 500 suffered its biggest one-day fall in two months last Wednesday. That sounds ominous, until you see the scale of the decline – just 0.6 per cent. It ended a streak of 50 consecutive days where the index avoided a daily decline of 0.5 per cent – the longest streak since 1965, according to LPL Research data. Indeed, the index had closed within 1 per cent of its all-time high over the previous 54 days, adds LPL, something unseen since 1964. It hasn’t fallen on three consecutive days for more than three months, the longest run in seven years.

The S&P 500 has now been within 3 per cent of all-time highs for more than a year, the longest period of calm in market history. Donald Trump continues to bleat about supposedly extraordinary stock market gains. In reality, 2017’s advance has been strong but not uncommonly so. However, in terms of risk-adjusted returns, nothing compares to what continues to be a remarkably stress-free year for investors.

Stocks are not that expensive, says Fed study

The US stock market may not be as overvalued as it seems, according to a new study by the Federal Reserve Bank of San Francisco. The study examined the S&P 500’s cyclically-adjusted price-earnings ratio (Cape), a widely-followed metric popularised by Nobel economist Robert Shiller.

The current Cape ratio of 30 has only been exceeded on two occasions – in 1929 and 2000, both prior to major market crashes. However, the Fed study attempted to study stock prices relative to the economic environment, taking into consideration interest rates, GDP and inflation. In 2000, this model suggested stocks were overvalued by 40 per cent, compare to only about 8 per cent today. The study sounds a cautious note, warning the Cape ratio is likely to contract modestly in coming years and that investors “may end up being disappointed” if they expect the high returns of recent years to continue. However, that’s hardly news.

The S&P 500 has generated annualised returns of 17.6 per cent since March 2009, and no one expects those returns to continue. If the Fed study is correct, then stocks are slightly overvalued, but not extremely overvalued, suggesting long-term returns might not be nearly as low as sometimes feared.