‘Locked in’ Vodafone investors get chance to cut their losses

Almost 335,000 Irish people were given shares in phone company 15 years ago 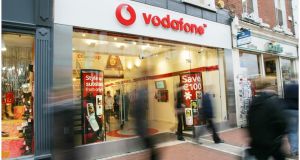 The Vodafone shares are a legacy of the then Fianna Fáil/Progressive Democrat government’s great experiment in shareholder democracy under minister for communications Mary O’Rourke. File photograph: Bryan O’Brien

Fifteen years after they were given shares they never wanted, Ireland’s army of Vodafone shareholders are being offered the chance to get rid of them at little or no cost.

Almost 335,000 Irish people own Vodafone shares, a legacy of the then Fianna Fáil/Progressive Democrat government’s great experiment in shareholder democracy under minister for communications Mary O’Rourke. All of them were among the almost 600,000 people who bought into the flotation of Telecom Éireann, as the company now called Eir was known in 1999.

Very few made any money on the deal as the value of the Eircom shares dropped just days after it joined the stock market.

The group sold off its most valued asset, Eircell, in May 2001 in a move that gave Vodafone its first entry into the Irish market. But shareholders were not given the option to cash out. Instead they received just under one Vodafone share for every two Telecom shares they held.

Ever since then, they have been waiting for shares in Vodafone to get to a level where they could at least break even in selling them. It has not happened.

Now Vodafone is offering a special low-cost share-dealing service to allow small “locked in” investors cash out. For investors with fewer than 50 Vodafone shares, there will be no charge at all.

Parallel to the Vodafone offer, many of the same shareholders are weighing up a separate low-cost offer to sell their Verizon share or shares.

Revenue, which steps in in cases such as this where company shares are divided, consolidated or sold for other shares, has said that Irish investors would need Vodafone’s share price to rise to the sterling equivalent of €4.58 before they make any money. As it stands, the shares are trading at around 225p sterling, or €2.96.

The absence of commission on selling the shares will help, but investors are still around €1.62 a share poorer on this latest deal. Hardly a blue-chip investment.

1 Bank leaked my loan request to family who tried to rip me off
2 Ryanair and Aer Lingus monitor impact of coronavirus on travel to Italy
3 How can I view my dead brother’s will if I’m not the executor?
4 Boris Johnson's new immigration regime will damage much more than industry
5 Doing the business
6 Artomatix buyer revealed as Unity Technologies
7 Exposed to coronavirus: How Irish business is coping with fallout
8 Five ways to create a culture of innovation in the workplace
9 Facing the music: how China is buying Germany’s piano industry
10 Irish cultural exports helped pave the way for economic growth
Real news has value SUBSCRIBE
Save money on international transfers