Is the housing crisis now starting to threaten jobs growth?

Smart Money: Employees on average wages can’t afford to buy or rent, so is the jobs boom sustainable? 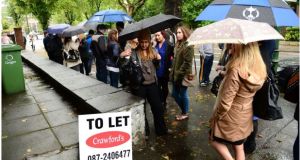 Daft recently calculated that the average supply of monthly rental properties is only a third of estimated demand. File photograph: Bryan O’Brien

City-centre rents and house prices are increasingly out of reach for those on average wages. As well as causing big problems for those directly affected, particularly younger employees and those returning to Ireland or coming to live here, this is also having a wider impact on the jobs market. But recent data suggests that job numbers continued to rise quickly in the capital over the past year. How is this happening, when those taking up many of the jobs can’t afford to live anywhere near the city centre? Here are the three key points.

1. Jobs growth is starting to slow

The Irish jobs market has performed remarkably in recent years, with total employment now exceeding the pre-crash peak and a net gain of 66,700 jobs over the past year, or not far off 1,300 a week. However there are signs that growth is slowing, with the quarterly rate of increase slipping each quarter from the start of the year.In the last quarter the increase was 10,700, or just over 800 a week. It is the slowest quarterly rate of increase since nearly 2017.

8 Colin Farrell: ‘After 20 years of drinking the way I drank, the sober world is pretty scary’

10 Air fryers: How good are they, really, and what can you cook in them?

11 Can Davy’s clients stay silent as board goes into conclave?

17 Mexican food that’s better than the takeaway? Here’s how to do it at home

24 Pro14: Munster-Connacht rivalry set to take on a sharper edge

28 Inside Jean Kennedy Smith’s Manhattan riverside duplex, up for sale for $6.4m

30 Loyalists and the Irish Sea border: ‘From what I’ve seen it’s all hyped up’

31 Walk tall, golfers, and tell Leo that golf is not the enemy at the gate

37 I’ve just won a scholarship. So the Government wants to take away my disability allowance