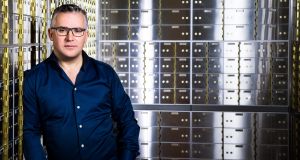 Co-founder of Merrion Vaults Seamus Fahy says clients are spending an average of between €7,000 and €10,000. Photograph: Mark Nixon

Irish people are spending more on gold as they buy the precious metal to safeguard wealth against Covid-19’s economic impact, according to one major seller.

According to the company, experts say gold bullion sales continue to increase in Europe and throughout Ireland despite an all-time high price for the metal of $2,035 (€1,669) an ounce.

“Clients are buying gold to protect their savings and pensions,” Mr Fahy notes. He adds that Merrion is seeing this demand in the Republic as well as in Glasgow and Edinburgh in Scotland, and Newcastle and Liverpool in England, where Merrion has safe deposit box centres.

Merrion sources the gold for clients from its suppliers in return for a margin on the transaction. The company often provides safe deposit boxes to customers to store the gold.

Its customers bought about €20 million worth of gold last year, it is understood.

Overall demand for its safe deposit boxes also grew in 2020, pushing up turnover in Merrion’s core business by 20 per cent.

This has prompted the company to expand further this year. It hopes to open a new safe deposit box centre in Barcelona in Spain shortly.

Merrion also plans centres in Belfast, as well as Bristol and Redding in England. The expansion will create about 35 jobs, the company predicts.

The company last year noticed a rise in the number of individuals and households storing valuables and heirlooms in safe deposit boxes as fears of burglaries grew.

“Research shows a rise in burglaries, many of them aggravated, in family homes and businesses,” says Mr Fahy.

“We are seeing more householders coming to us in all our outlets to store valuables and investments away from the home.”

He adds that companies and other organisations are also increasingly using safe deposit boxes to store confidential information off their premises, to comply with regulatory and insurance requirements.

A more recent trend is for investors to store bitcoin codes and information in Merrion’s boxes to keep them offline where they cannot be hacked.

The business is in talks with suppliers about allowing clients to use the cryptocurrency to buy gold, another trend that emerged in 2020.

Covid-19 followed a few years where nervousness sparked by political instability brought about by Brexit and other events also increased demand for safe deposit boxes.

Mr Fahy co-founded Merrion Vaults with colleague David Walsh in 2013 after finding it difficult to find such a service himself for his other business, Voltaire Diamonds, as banks no longer offer it.

It began with a facility in Dublin city centre and subsequently expanded into Britain.

Each centre features tough security with alarms and sensors monitored by local police. Lloyds of London insures each and approves the security measures.