Dividing up the spoils: The finances of divorce

Away from fraught emotion, equity and bank balances direct the dissolution of marriage 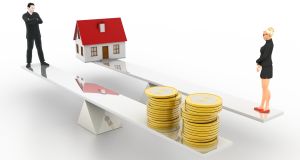 Delicate balance: Did a spouse sacrifice work opportunities for their family and partner? Should they be expected to get back into the workforce if they took time out to raise a family?

We might have one of the lowest divorce rates in Europe, but a recovering economy means that numbers are on the rise once more, as couples take advantage of equity in their homes and more money in their bank accounts to fund a dissolution of their marriage.

In 2016, for example, the number of people who divorced rose by 18 per cent on the previous year. But if the partnership must end, what do you need to know?

Many women – and increasingly some men – will be entitled to a financial settlement, once their separation/divorce is finalised. While the vast majority of settlements are still paid by men to their former wives, the tide is slowly turning. Muriel Walls, partner with Walls and Toomey, notes a recent client where the wife was a serious earner bringing in more than €250,000, while the man was earning about €60,000.

While courts are ostensibly gender-neutral, Walls points to some signs of inequity, with lower-earning men faring worse in settlements than their female counterparts do. But, she also says the “fundamental difference” in these cases, is often that women will have “sacrificed their career and prospects for the benefit of the family”.

“And you don’t find that dynamic as often on the husband’s side.”

Nonetheless, there will be an expectation from the courts that women who have given up on, or downsized, their careers to care for their families, will go back to work once the marriage ends.

“Someone coming in saying ‘I’ve three children and I don’t want to work’ doesn’t really cut it,” says Walls.

“It effectively puts her in much the same financial situation and, from the husband’s point of view, costs the same,” notes Walls.

Typically, how much the settlement will be depends on a number of factors. Did a spouse, for example, sacrifice work opportunities for their family and partner? Should they be expected to get back into the workforce if they took time out to raise a family?

According to Walls, the amount of the settlement typically comes down to making sure there is proper provision in the event of a dependent spouse. Where assets may not be significant, typically they will be split 50:50. However, in cases where there might be a business, properties and investments for example, the split may favour one side over the other.

“The assets might be worth €10 million but the wife won’t necessarily get €5 million – she might get €4 million,” notes Walls.

Given the change in economic circumstances, some people who reached a settlement in the dark days of the recession might now want to come back to the courts to ask for more. They are entitled to but, according to Walls, courts are not looking favourably on second applications.

“If someone finalises something, unless there’s some extraordinary or unforeseen event, they’re stuck or bound by the constraints of the [original] deal,” she says.

So, if you weren’t as prudent as you should have been with your settlement, or your ex-spouse got a significant pay rise, this is likely not sufficient to go back and ask for more.

While some may think it’s confined to an episode of The Good Wife, hiding assets does happen in everyday life too. “You’d be so surprised at how sneaky people can be,” Sarah McGurrin, co-founder of Orca Financial/Oomph.ie, says.

This is why it’s important that both spouses are engaged with their finances all through their marriage, and not just at the end.

For many couples, their biggest asset is their home but keeping it isn’t always straightforward.

As McGurrin notes, there are several options, including the remaining spouse buying the ex out, selling it and both parties buying again or – when financial circumstances dictate – both spouses remaining in the home.

“Will you have enough income to support a mortgage?” is a key question McGurrin asks, noting that banks won’t take maintenance payments into consideration when working out someone’s income.

This, when combined with Central Bank mortgage lending rules, can make buying out a family home, or starting again, trickier.

Consider a couple who bought in 2006 at five times their income; their income has now shrunk because the wife works less, but their home is only edging out of negative equity. If they sell the house and split the proceeds they may not be left with very much – and will both need downpayments, as second-time buyers, of 20 per cent to buy again.

Not only that, but the bank will now typically only lend them 3.5 times their income, which may not come to enough in urban areas like Dublin.

And where a spouse wants to take sole ownership of the property, this too can run into problems if they don’t have a strong income to back it. “The bank won’t increase their liability by letting one of the people on the mortgage off,” says McGurrin, although there can be ways around this.

“You do hear of arrangements where the ex-spouse will reduce child maintenance and cover most of the mortgage so the other spouse can stay in the property,” she adds, adding that some banks may also allow an interest-only period if repayments are too high.

One couple McGurrin has dealt with simply could not buy again, and so one spouse is returning to his own family’s home, and the other is looking for social housing, because neither could afford the mortgage themselves.

Age can also be a barrier to getting a new mortgage; if you’re 50 for example, you may only be able to borrow until you’re 65, which can make repayments expensive.

If you are divorced or separated with children, you will once again be treated as an ordinary single person, except for the tax system, which offers single parents some relief.

First of all, single parents can apply for the single parent tax credit. Up until 2014, both parents could apply for this credit of €1,650 which reduces your tax bill by a welcome €31.73 a week. However, since then, only one parent – often the parent who has primary custody of the children – can claim it.

Single parents can also pay tax at the lower rate of 20 per cent on €4,000 more of earnings than a single person, as the lower rate band of €38,550 applies to them. However, to qualify for this, children need to be either under 18 or, if older, in full-time education.

Another point to note is that you can’t be co-habiting if you’re going to receive this tax credit.

Other tax issues which can arise relate to transfer of assets. Typically these will be transferred ahead of the divorce date to ensure that neither capital acquisitions tax nor capital gains tax applies to any transfers.

“Most of adjustment orders tend to be for the wives,” says McGurrin, although she adds, “but I imagine as time goes on that will change”.

After the house, pensions are often a couple’s other major financial asset, so agreeing a pension adjustment order needs to be done carefully and prudently. It’s an area McGurrin finds that the dependent spouse can fall behind in.

“A lot of time, when it’s made, an ex-spouse will say ‘leave it where it is’,” she notes. But if you do this, and your spouse invests the funds unwisely and the fund is depleted, you will lose out. In addition, the dependent spouse also won’t be able to access the pension until the other spouse retires.

“The simplest way is that, once you get the PAO [pension adjustment order], establish your own independent pension and put it into your own name. Then from age 50, if it’s a retirement bond, you can access it yourself,” McGurrin advises.

This can confuse some people, and it means that some people might leave themselves exposed to a penurious retirement if they don’t do the sums and start providing for their own pension, if needs be.

You’re still liable for the entire loan, and the bank can still come after you for the half that’s not paid

“What’s built up [in an ex-spouse’s pension] after the judicial separation doesn’t accrue to her,” Walls says. While a pension split will typically be of the order of 50:50, a court may give a dependent spouse 55 per cent in the event that the couple are approaching retirement, and won’t have enough time to provide for themselves.

When you’re married, debts might be jointly owned. Don’t necessarily expect this to change after a separation or divorce. Any debts owned jointly may stay the same after the separation.

One quirk of maintenance payments is that, if spouses come to a voluntary agreement, any payment received will be free of tax; but if it’s as a result of a court order, tax, at the marginal rate will apply to maintenance paid to another spouse. Payments for children are tax exempt.

This means that, when court ordered, the spouse making the payments can claim tax relief while the other spouse must pay tax.

It can be a “double-edged sword”, as McGurrin notes. If you want tax-free payments, then you could go with a voluntary agreement, but this isn’t certain. And with a court-ordered payment, there is tax owed, but it is fixed, and the party giving it can avail of tax relief on it which may afford a greater payment.

And, of course, just because you’re no longer married doesn’t mean you no longer have an interest in their longevity.