Eating and drinking at home creates more domestic waste, but there are ways to limit volumes, save money and help the planet 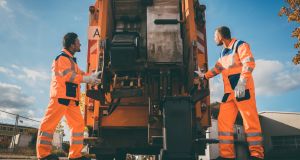 All householders using a licensed waste collection service have a right to access details of how much waste they produce, including the weight and type of waste

Are you throwing €1,000 away every year? If you are not being smart with your household waste, or shopping around for the best waste collection plan, then it’s not just your rubbish that’s going in the bin.

Irish households pay up to €400 a year for a kerb-side waste management service, according to a report commissioned by the Irish Waste Management Association. Waste collection companies offer multiple packages, but the majority have coalesced around a service charge that includes a weight allowance with a per kilogram excess charge for anything over that.

So while it pays to shop around, no matter what your provider the more you dispose of, the more you will pay. Cutting your waste will cut costs.

Psychologists say family mealtimes are an important bonding ritual. With schools and colleges closed, most of us remote working if able to, and many eateries shut because of coronavirus, we’re spending more time eating at home. Bonding isn’t the issue; it’s keeping everyone fed.

More cooking, eating and drinking at home is generating more domestic food waste than ever. But there are some ways to keep volumes in check, saving money and also helping the planet.

“Most people throw away about a third of the food they buy. For an average family that could add up to about €800 a year,” says Mindy O’Brien, co-ordinator of environmental charity Voice Ireland.

“Now you have four or more people at home eating breakfast, lunch and dinner. You are not normally cooking all those meals, so the main thing is planning.”

Supermarket group Lidl says the Covid-19-inspired panic buying witnessed on the Thursday after St Patrick’s Day resulted in the group’s busiest day since it entered the Irish market two decades ago. With many homes already having full cupboards, you should evaluate what you have before buying another thing.

“Rice, beans, pasta, those lentils that have been sitting there for so long, see if you can make meals out of what you already have,” says O’Brien. “Just type in three ingredients in Google and you will come up with a meal.”

Using what you have means saving money and also fewer trips to the shops, a good thing for the community and your pocket.

In the weeks ahead, she advises buying staples to keep food and packaging waste down.

“I bought tins of tomatoes, chickpeas or other beans – things that will last along time so if I don’t use it during this time, I can use it later.”

She advises investing in non-perishables too such as frozen vegetables where you can use some and put the rest in the freezer. “Tinned food and dry goods are often those things that are not that expensive.”

When it is time to do your next shop, by meal planning and shopping with a list you can avoid paying for food on the double.

“You are paying for it at the supermarket and paying for it to be removed in your bin,” says O’Brien. “For each kilo of food you throw away, it costs you about €3. That’s both in the purchasing of it and in the waste disposal cost.”

Websites like stopfoodwaste.ie will help with meal planning, shopping and using leftovers to reduce waste bills.

When you do have food waste, dispose of it properly in your brown bin.

“Your most expensive bin is what is called your residual or landfill bin,” says O’Brien. “Food is very heavy, it has a lot of water in it, so if you are putting your food waste into your landfill bin, it’s going to make it a lot heavier and you are going to be paying more per kilo. A brown bin is cheaper than your residual bin.”

With more domestic waste likely in the weeks and months ahead, it’s a good time to review your waste disposal contract.

All householders using a licensed waste collection service have a right to access details of how much waste they produce, including the weight and type of waste. Knowing this will verify the accuracy of your bills and help you check your habits so that you can find the best price plan for you.

When contacted as part of a mystery shop in January, most waste collection companies communicated their most popular package only, not always the most cost-effective one.

“There was a failure to refer callers to additional offers available on company websites,” says the Department of the Environment and Climate Action, whose price-monitoring group conducted the research. “This does raise important customer service issues.”

Its research showed a high degree of price fluctuation in the month. One provider doubled its excess waste lift charge. Another increased its waste lift charge from €7.50 to €10 and its recycling charge went from being free to €5.50 – though this may reflect industry-wide increases in recycling prices.

To cut costs first check your existing spend, and check if your operator has other offers to help you save money based on your profile.

If not then call competitors, asking specifically for the best offers to suit your needs, not just the most popular ones.

If you are a contract rather than a “pay as you go” customer inquire about the notice period. Some contracts roll over and you may find yourself in another term when you don’t want it. Pay particular attention to any time limits for cancelling.

Over 200kilos of waste packaging, 59kg of which is plastic, is generated per person every year in Ireland. This is above the average among our EU neighbours, according to the Department of the Environment and Climate Action. Repak is calling on householders to play their part by recycling as much as possible during the current extended period at home.

“Knowing what items can be put in a recycling bin is an effective means of managing waste bin levels,” says Elaine Phillips, head of marketing and communications at Repak.

“All items in your recycling bin must be clean and dry to prevent food and liquids contaminating paper and cardboard. Recyclable items when contaminated stand to contaminate the whole recycling bin.

“In the kitchen you should empty all cans, bottles and plastics, and give them a quick rinse, waiting until they are dry to place them in the bin,” says Phillips. Recyclables should be placed loosely in the bin, not in plastic bags.

Globally recycling costs are on the up. This hits consumers’ pockets too. The best way to manage costs is to buy less. Where you must buy, mywaste.ie is a useful guide to recycling it or making sure it goes in the most cost-effective bin.

If you are one of the 400,000 people living in an apartment block, bins may well be a bugbear. Apartment owners will know that bin charges make up a hefty portion of their annual management charge. Tenants feel it in their rents too. With residents using a shared bin store, it may feel nothing can be done to increase recycling and food waste disposal compliance to reduce costs.

“For one apartment complex with 80 units, the cost of bin collection was €24,000, which is huge,” says Gavin Brangan, co-founder of green technology company Accessgreen. He estimates that 30 per cent of waste in communal bins is left by people who don’t even live there. Fly tipping and the dumping of mattresses and furniture is a bane too.

“The cost for waste removal in apartments is €30 for a 1,100-litre bin, but it’s about €10 for the same amount of recycled material, says Brangan.

His cloud-based system gives residents bin store access via their phone. Residents also sign a social contract, based on UN sustainability goals, agreeing to abide by the community’s values of waste reduction and recycling.

“When someone opens the bin store, we know who they are. If they put a mattress in, they will be fined.”

Getting apartment residents to separate their waste and recycle more has brought huge savings for one Co Kildare complex with which he works. “We reduced the waste collection costs by 50 per cent to €12,000 and the capital costs were repaid in six months.”

Says Brangan: “We provide a lot of recycling information and updates over the phone to residents. Our aim is to 'gamify' it to so that one apartment block can see what their recycling rates are compared to another block.”

The system has also brought savings to those living in another Co Kildare duplex scheme, where four homes share an entrance. There were up to 12 bins outside each entrance. By building a communal bin store and installing the Accessgreen system, residents paying about €300 a year for waste disposal now pay half that. They have four or five bins rather than 60 and the noise of trucks from multiple bin companies is gone too, says Brangan.

With some bin companies signalling price rises due to higher disposal costs and increased regulation, our bin charges may be on the up. Consuming only what we need means paying less to dispose of the waste.