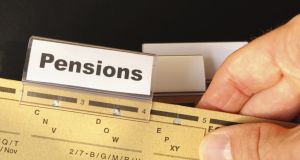 Global benefits consultancy Mercer has proposed that Irish pension savers should be allowed access to their retirement pots as they face a short-term cash squeeze in the Covid-19 crisis. Photograph: Getty Images/iStock

Pension savers should be allowed access to their retirement pots as they face a short-term cash squeeze in the coronavirus crisis, benefits consultant Mercer has advised.

About 330,000 people have found themselves suddenly and unexpectedly unemployed, according to figures released on Thursday, as the Government shuts down large parts of the economy, deemed “non-essential”, to try to halt the spread of the killer pandemic. Many others have seen their pay cut, sometimes dramatically.

“Allowing individuals restricted access to draw down pension savings on an emergency basis would provide some immediate relief,” said John Mercer, chief executive of Mercer Ireland. “Although the State has introduced measures to help those affected, a financial shortfall will remain for some.”

Mercer said the move was not without precedent as Australia has recently proposed changes to allow access to pensions to citizens materially affected by coronavirus, also known as Covid-19.

Mercer has also warned that the Government should not countenance any reintroduction of a pension levy. It said such a raid on savings would “do serious damage” to the Government longer-term policy of encouraging more people to save adequately for their retirement.

Instead, the benefits consultants suggested that pension funds could help the economy recover from coronavirus if the Government introduces a new inflation-linked National Emergency Bond “to help cover the immense cost of this pandemic”.

About €36 billion held in defined benefit pension plans is invested in bonds, Mercer said, some of it linked to the European Central Bank’s Harmonised Index of Consumer Prices as the closest available, yet imperfect, match to Irish CPI-linked liabilities.

Access to pension savings are restricted by law as they are designed to be accessed only on retirement. Any emergency access to meet the current crisis would require legislation, which is not currently possible in the absence of a new Government.

Mercer said one approach would be to allow people with defined contribution plans – the most common pension arrangement in the private sector – once-off access to draw down up to 15 per cent of their pension fund up to a maximum of €25,000.

Equivalent arrangements could be made for holders of defined benefit – or final salary – pension schemes, the consultants said, while restrictions on accessing Approved Minimum Retirement Funds for people with limited retirement income should also be lifted.

Tapping pensions, which attract tax relief as they are built up, would have tax implications. Mercer says the Government could tax the money at the same rate as the missing earnings it will replace or could waive tax altogether as a once-off gesture, given the hardship and worry that many of the individuals concerned will already be experiencing.

Mercer noted that most workers are not saving enough for retirement as it is.

“Any withdrawals now will exacerbate that problem so it will be important to communicate the need to restore retirement savings pots when financial circumstances allow,” Mr Mercer said.