Tax avoidance is not a ‘victimless issue,’ says Fianna Fáil 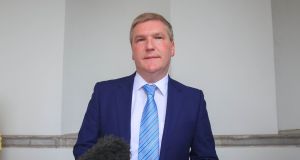 All Irish people must pay their “fair share” of tax to fund and improve public services and tax avoidance is not a “victimless issue,” Fianna Fáil finance spokesman Michael McGrath has said.

The Revenue Commissioners should be asked if they need any extra powers to tackle offshore tax avoidance, Mr McGrath added.

The Cork South Central TD also claimed there is a “very fine line” between tax avoidance and tax evasion.

He was speaking in response to the numerous revelations made by the disclosure of the Paradise Papers this week.

The investigation has revealed that U2 frontman Bono made a number of property investments via offshore entities including a shopping centre in Lithuania and an office building in Germany.

In a statement, Bono said he would be “extremely distressed if even as a passive minority investor ... anything less than exemplary was done with my name anywhere near it”.

Documents in the Paradise Papers also show three actors with the highly successful Mrs Brown’s Boys comedy were paid through an offshore structure that sheltered them from paying income tax on hundreds of thousands of euro each.

The actors who made use of the structure are Fiona Delany, daughter of the show’s creator, Brendan O’Carroll, who plays Maria Brown, and her husband, Martin, who plays Fr Trevor Brown. A third actor, Paddy Houlihan, who plays Dermot Brown in the highly successful comedy was also paid through the scheme.

Mr McGrath said: “If people aren’t paying their fair share of tax, and that includes Bono and many others, then others will suffer as a result of that.

“I think most ordinary people who are getting up early in the morning and who are going to work and people who are paying tax on pension income and who are making great sacrifices, who care for people at home, they want to know that everyone is paying their fair share.

“And if you are tax resident in Ireland then you should not be availing of complex offshore structures to avoid your responsibilities in this State.

“It has been long known that he (Bono) has been availing of structures offshore. To my knowledge, he is not tax resident in Ireland.

“The issue for this country is determining whether someone is tax resident, whether they are tax resident, I think there is an onus on every Irish person to ensure they are paying their fair share.

“ This isn’t a victimless issue, it does comes down to funding that is available for vital public services.”

Mr McGrath said Revenue Commissioners should come before the Oireachtas Finance Committee to assess whether their powers are adequate.

“We would hold a number of hearings on the issue of offshore activity transactions and assets based offshore belonging to Irish citizens,” he said.

“You do get the sense that the papers that have been released are only tipping the very edge of this issue and I think there is a need for a detailed body of work to be undertaken.

“We as a country cannot control all of these issues but we need to ensure that our own house is fully in order and we are not complicit in tax avoidance tourism.”

“We have made very significant strides over the last number of years to change our own regime and to make it more transparent. There are always more steps that can be undertaken.”

1 Aldi to impose limits as Christmas toys go on sale
2 Charting the stock markets: does technical analysis work?
3 How to avoid a communication breakdown
4 ‘I hate haggling because I hate when people do it to me’
5 Banks urge borrowers facing hit from new restrictions to engage
Real news has value SUBSCRIBE