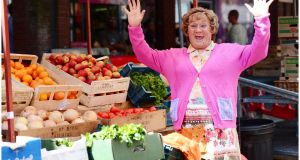 Mrs Brown’s Boys is a spectacularly successful TV, film and theatre comedy phenomenon that has made its creator, Dublin writer and actor Brendan O’Carroll, into a multi-millionaire.

O’Carroll’s desire to involve his family and long-term family friends has meant that the list of those who work in, and directly profit from, the commercially successful enterprise, is akin to a family wedding invitation list. O’Carroll’s three children, Daniel, Fiona and Eric, all act in the hit production, as do their spouses and friends.

The Irish, UK and Australian companies that form the corporate backdrop to the global enterprise are owned by O’Carroll and his wife, Jennifer Gibney, who plays Cathy Brown in the comedy.

The TV series is produced by BBC Scotland, the couple’s company BOC-Pix, and RTÉ. Repeats play around the globe, and a version involving different actors is produced in Romania. O’Carroll and Gibney are domiciled in Ireland, tax resident in the UK, and resident in the US. They live in Florida.

Earnings from TV productions, repeats, DVDs, and theatre productions are taxed in various jurisdictions, including Australia where the production is hugely popular. The couple are tax resident in the UK because of the amount of time they spend each year working there. Florida does not charge income tax, but royalties, which are O’Carroll’s main source of income from the Mrs Brown’s Boys phenomenon, are taxed. When the money taxed globally is mixed with the taxes paid in the US, the blended rate is understood to come in at approximately 38 per cent.

For the past decade or more, the financial affairs of the complicated accounts for the global commercial operation that lies behind the Mrs Brown’s Boys phenomenon, have been overseen by English accountant Roy Lyness. More recently, Lyness introduced three of the cast – Fiona and Martin Delany, and Paddy Houlihan – to a tax scheme involving trusts in Mauritius. The scheme was used for some of the actors’ income from theatrical productions of Mrs Brown’s Boys, according to Houlihan.

Neither O’Carroll nor Gibney were part of the scheme. It is understood O’Carroll got an assurance from Lyness at the time that the scheme was legal. Fiona Delany is his daughter.

Mrs Brown’s Boys has won numerous awards including a best sitcom Bafta award, while O’Carroll, who plays Agnes Brown, has likewise won a huge list of awards for his writing and acting. The production is popular in Ireland, the UK, Australia, Canada, New Zealand, the Czech Republic, and elsewhere.