Paradise Papers: US tech firm set up in this Dublin office block to halve tax bill 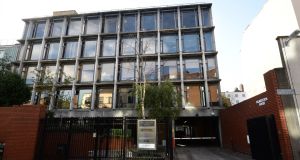 Citixsys Ltd is based in the offices of Cafico in Palmerston House, Fenian Street, Dublin 2 Photograph: Dara Mac Dónaill

A tech company owned by an Indian entrepreneur set up a “double-Irish” tax structure for his multinational group just weeks after the then Minister for Finance, Michael Noonan, announced he closing the loophole.

Leaked documents show that the availing of a ten-week “window of opportunity” left by Mr Noonan when announcing his move, allowed Citixsys cut its global tax bill by half.

The companies were incorporated on December 8th 2014, three weeks before the shutters came down for any new corporations putting the controversial global tax structure in place.

On Budget day 2014 - October 14th - Mr Noonan said use of the structure for those companies that had it in place by January 1st, 2015, was to end in 2020. That gave corporations that did not have the structure in place, ten weeks to do so. They could then avail of the benefits up to January 1st, 2021.

Leaked documents from the Appleby offshore law firm in the Isle of Man show it was contacted by email by the San Francisco law firm DLP Piper on November 26th, 2014, saying it was working on putting in place a double Irish structure for Citixsys before year’s end.

DLA attorney Maureen Doren said it was envisaged that a new Irish company would be tax resident in the Isle of Man and have its first board meeting there just two weeks later, on December 16th. The meeting was to be held in Appleby offices.

“At the end of 2014 a window of opportunity closes to implement a double Irish structure and thus benefit from a single digit effective tax rate on non-US revenues through to calendar year 2020,” a DLP Piper document drafted in December and sent to Appleby explained.

The two new Irish Citixsys companies account for most of the non-US global sales of the group, which specialises in technologies for retailers. One of the two companies, Citixsys International, is tax resident in the Isle of Man, where there is a zero rate of corporation tax.

The other, Citixsys Ltd, is based in an office building on Fenian Street, Dublin 2. It does not have its own offices but uses a corporate services provider, Cafico International, which has an office in the building from which it provides services to a number of companies, including Citixsys. A request for a comment from Citixsys met with no response.

Citixsys Ltd owns subsidiaries in the UK, India, Australia, Canada, Singapore, and Mexico and these companies revenues flow to the Fenian Street company and from there to Citixsys International, which is resident in the Isle of Man, which has a zero corporation tax rate.

The 2014 announcement by Mr Noonan was praised by the Organisation for Economic Co-Operation and Development (OECD), which had been asked by the G20 to devise a plan (the Beps project) for combating multinational tax avoidance structures such as the notorious double Irish.

The structure is used by many of the world’s largest corporations including Facebook, Google and Microsoft. They are all understood to be working on establishing new structures for lowering their tax bills, to be used from 2021 onwards.

A spokesman for the Department of Finance said it was not known how many multinationals set up a double Irish structure in the wake of Mr Noonan’s 2014 announcement.

The DLP Piper document envisaged that by the end of 2014 the new Irish operating company, Citixsys Ltd, would have group intellectual property transferred to it from elsewhere around the globe, an office leased in Dublin, an employment contract signed with an executive, recognised customer revenue, and “at least one back-office employee”.

The bulk of the profits collected by the new Irish company from subsidiaries around the world, but not in the US, would go to the company resident in zero-tax Isle of Man “as tax deductable royalty” payments, it said.

The non-US subsidiaries would make just enough profit to cover their costs plus some compensation. The net result would be that “most of the profits are paid as royalties to Citixsys International and therefore taxed at 0 per cent rate” in the Isle of Man.

Citixsys International is owned by its holding company in the US, which in turn is majority owned by the group’s founder, Kamal Karmakar, of New Delhi, India.

The DLA Piper documents says that post-2020 the low effective tax rate for Citixsys might be maintained by moving the residency of Citixsys International to a low tax country such as Malta.

1 Coronavirus: Construction sector most significant part of new shutdown
2 Wetherspoon’s panto-villain chairman may have the last laugh
3 UK needs to be honest about its Covid-19 strategy
4 Can husband keep savings and half the house in divorce?
5 British exceptionalism backfires in style as Johnson tests positive for coronavirus
Real news has value SUBSCRIBE