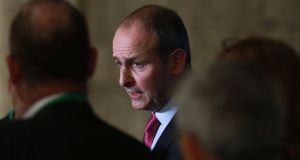 Multinationals have to contribute more to society, Fianna Fáil leader Micheál Martin has said, but he stopped short of agreeing to further Irish budgetary change to claw back more tax breaks from the companies.

Responding to the international tax avoidance revealed by the Paradise Papers investigations, Mr Martin told RTÉ’s This Week that, globally, corporations had to contribute more in taxes, but Ireland could not bring that about alone.

He said he supported proposed international tax changes under the OECD’s base erosion and profit shifting (Beps) project, “to get a higher return there”.

“They [multinationals] have to contribute more to solidarity and to cohesion within society,” he said.

The Fianna Fáil leader was asked about amending a budget change introduced by Minister for Finance Paschal Donohoe that could save multinationals from paying an additional €850 million in tax in 2018.

In October 2014, then minister for finance Michael Noonan abolished a cap of 80 per cent on the amount of profit that a company could write off in any one year using capital allowances.

Mr Noonan’s move meant that a company with sufficient capital allowances could pay no tax at all on the profit associated with intellectual property expenditure, as against having to pay tax on at least 20 per cent of the profit.

In last month’s budget, Mr Donohoe reinstated the 80 per cent cap, but only for investments undertaken after budget day, permitting companies the full tax write-off for past investments next year.

Seamus Coffey, chairman of the Irish Fiscal Advisory Council, estimated in an article in The Irish Times on Saturday that if the 80 per cent cap applied to all capital allowances, it could have led to up to €1 billion more in tax being collected in 2018.

Taoiseach Leo Varadkar has insisted the Republic will maintain its tax sovereignty and that reforms are made to the country’s tax regime “all the time”.

Asked about Mr Coffey’s article, which was written in a personal capacity, Mr Varadkar said: “Ireland will decide what its taxes are and we will retain our corporation profit tax at 12.5 per cent.

“But it is absolutely the case that tax policy does get changed over time, probably in every budget, as we try to close off any loopholes that might be exploited, either by individuals or large companies.”

Mr Martin said that extreme care must be taken when it came to “retrospective” changes to tax policy, warning that the multinational sector required “certainty”.

“If we start changing the goalposts two or three years on, I think that is problematic,” he said.

Still, he said that his party would examine the idea of imposing the 80 per cent cap on all claims for capital allowances, not just in relation to investments made after budget day.

He found it “very difficult”, he said, that nobody in the Department of Finance could have seen the “unintended consequence” of Mr Noonan’s budget change leading to tax breaks claimed by corporations on intellectual property soaring from €2.7 billion in 2014 to €28.9 billion in 2015.