Apple made key subsidiary Irish-resident for tax reasons in 2014 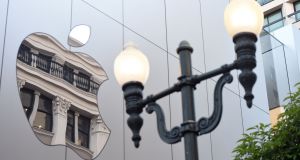 The world’s most profitable corporation, Apple, has made one of its key subsidiaries Irish-resident for tax purposes as part of a major restructuring that allows it to continue avoiding billions of euro in tax.

The subsidiary, Apple Operations Europe (AOE), is one of the three Irish-incorporated subsidiaries that were for years “stateless” for tax-residency purposes and which facilitated Apple in avoiding tax on tens of billions of euro in annual profits on its global sales.

The Irish Times has established that AOE has been resident here for tax purposes since the end of 2014. However new figures on the amount of Irish corporation tax paid by Apple over the past three years (€1.27 billion) show the company’s new tax residency has led to no appreciable increase in Apple’s annual Irish corporation tax bill.

Documents contained in the Paradise Papers show the other two Irish-incorporated Apple subsidiaries that for years were also stateless for tax purposes, took up tax residency in Jersey – where corporate profits are tax-free – in December 2014. All three subsidiaries have addresses in the Hollyhill Industrial Estate, Cork.

The leaked documents from the Appleby offshore law firm show that, in the wake of the then minister for finance, Michael Noonan, announcing in October 2013 that he was closing down the loophole that allowed Irish companies to be “stateless” for tax purposes, consultants acting for Apple wrote to the law firm and asked what would happen if the Irish companies were registered in a list of tax havens and offshore jurisdictions.

Two of the tech giant’s Irish subsidiaries that used to be “stateless” for tax purposes – Apple Sales International (ASI) and Apple Operations International (AOI) – were subsequently registered as external companies in the British Crown dependency of Jersey in December 2014. The third, AOE, became tax-resident here. The announcement by Noonan came into effect on January 1st, 2015.

Last year, the European Commission said Ireland’s historic tax treatment of two of the subsidiaries, AOE and ASI, constituted state aid. It wants Apple to pay back-taxes of €13 billion, plus interest, covering the years 2003-2014. Ireland and Apple are both contesting the commission’s interpretation of the tax arrangement.

The leaked Appleby documents were obtained by Süddeutsche Zeitung and shared with the International Consortium of Investigative Journalists, of which The Irish Times is a media partner.

The documents show that in March 2014 the law firm was contacted by US law firm Baker & McKenzie in San Francisco on behalf of Apple, who wanted information about how Irish incorporated companies would be treated if they registered as external companies in the British Virgin Islands, the Cayman Islands, Bermuda, Guernsey, the Isle of Man and Jersey.

The documents show that Appleby answered a questionnaire in relation to each offshore jurisdiction, as well as giving information as to what services the offshore law firm could provide in each location. In the event, Jersey was chosen.

Apple wanted to know the steps necessary to have an Irish company qualify as having its “principal place of business” in each of the offshore locations, whether that would create a tax liability, what information would have to become publicly available, and whether an assurance of tax exemption could be given.

“Is there a credible opposition party or movement that may replace the current government?” was one of the questions asked in relation to each jurisdiction. The tech giant also wanted to know how long it would take an Irish company to deregister from each jurisdiction, as well as whether Appleby had facilities for holding board meetings in each jurisdiction, and how much using those facilities would cost.

A spokesman for Apple would not comment on the current residency of the three formerly stateless Irish subsidiaries.

“When Ireland changed its tax laws in 2015, we complied by changing the residency of our Irish subsidiaries and we informed Ireland, the European Commission and the United States,” the spokesman told The Irish Times.

“The changes we made did not reduce our tax payments in any country. In fact, our payments to Ireland increased significantly and over the last three years we’ve paid $1.5 billion (€1.27 billion) in tax there – 7 per cent of all corporate income taxes paid in that country. Our changes also ensured that our tax obligation to the United States was not reduced.”

However it is already known that Apple’s other Irish subsidiaries paid $400 million in corporation tax in 2014, before AOE took up tax residency here. The spokesman said he did not want to comment on this point.

In its decision in relation to AOE and ASI, the European Commission said that, at the end of September 2015, Apple Inc had cash and securities worth $186.9 billion in its non-US subsidiaries. “This amount correspondents substantially to foreign profits which were not subject to taxation.” The cash pile had since grown to $252 billion, according to a filing made by Apple in the US last week.

1 Coronavirus: Construction sector most significant part of new shutdown
2 British exceptionalism backfires in style as Johnson tests positive for coronavirus
3 Wetherspoon’s panto-villain chairman may have the last laugh
4 Remote working doesn’t suit everyone, and it exposes woolly leadership
5 UK needs to be honest about its Covid-19 strategy
Real news has value SUBSCRIBE