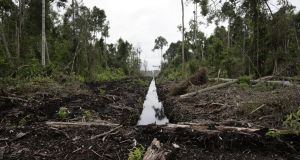 On the island of Padang, in the heart of Indonesia’s industrial logging country, a group of teenagers pointed to the charred remains of sago palm trees – the remnants of the fires that have scorched the archipelago nation’s lush forests for two decades.

“There’s a sense of anger,” said Alvin (15), who grew up in the village of Bagan Melibur. “The effects of forest burning and deforestation are enormous” for both humans and animals, he said.

1 A letter to Ireland from Italy: this is what we know about your future
2 Look on the bright side: International Space Station visible in Irish skies tonight
3 I was on the Peru rescue flight. This is what happened
4 Tempers fray as coronavirus lockdown fatigue hits Italy and Spain
5 Coronavirus: 133 patients in intensive care as pressure on hospitals builds
6 Coronavirus: Spain and UK suffer highest daily death tolls
7 Coronavirus: Letters flow to self-isolating father whose children were found dead
8 Members of same household may exercise together, Government confirms
9 Coronavirus: Restrictions resulting in ‘huge’ fall in rate of infection growth
10 US authorities scrutinise Zoom’s practices as app’s traffic surges
11 Coronavirus: HSE says it hopes to reopen all testing centres as supplies replenished
12 Testing failings mean we do not know exactly where the virus is circulating
13 Ireland ‘squanders’ geographical advantage with different Covid-19 stances North and South - Scally
14 The chickpea stew that broke the internet in the US is here. Give it a go
15 Medtronic shares ventilator design publicly to increase production
16 How to make a rhubarb and custard tart worthy of Ballymaloe
17 Fintan O’Toole: We can’t help giving meaning to this absurd virus
18 From yoga to HIIT training, your guide to solitary exercise
19 Paul Flynn: Here’s what happened when my kids took over our kitchen
20 How to budget your way through financial realities of Covid-19
21 Meath couple’s company hit with €105m discount on purchase price
22 Man arrested after social distancing row at bank is released on bail
23 ‘This is sick’ - seventh-tier Swedish club cancels friendly after betting mayhem
24 Ambassador to US warns Irish on short visas to go home
25 Looking for a nifty home-working desk? This Irish designer model could solve your problems
26 Judge dismisses claim man was maliciously prosecuted over Shell to Sea protest
27 Seanad election: Green Party’s Saoirse McHugh fails to win seat
28 Covid-19: Teachers may be redeployed outside education sector
29 Unionists ask for chance to change new NI abortion laws
30 The Irishman living in lockdown in Madrid as it is brought to its knees by Covid-19
31 Coronavirus: Teachers will not be redeployed to help health service, unions say
32 Will pandemic payment give me PRSI stamp as retirement looms?
33 Sky Sports customers set to save on bills until Premier League returns
34 Gabriel Scally: North and Republic must harmonise Covid-19 response
35 Probationer Garda takes legal action in attempt to prevent dismissal
36 Couple in mortgage legal-fees dispute receive €10,000 compensation
37 Coronavirus: Northern Ireland death toll rises to 28
38 10 hilarious Irish comedy videos to watch on YouTube
39 J&J and Abbott announce potential coronavirus vaccine and rapid test
40 Gerry Thornley: Changes to tackle laws could transform rugby by time of next World Cup
Real news has value SUBSCRIBE