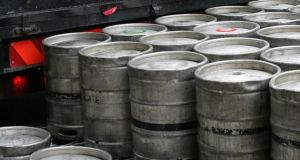 At a time of high global demand for metal, stealing steel beer kegs for scrap metal has become a lucrative trade. . Photograph by Frank Miller/Irish Times

More than 400,000 beer or cider kegs, costing approximately €40 million, have been stolen or gone missing from licensed premises in the Republic since 2007.

At a time of high global demand for metal, stealing kegs for scrap has become a lucrative trade.

According to the IBA’s Thomas Burke, the cost of replacing a keg is approximately €100.

“Metal theft has emerged as a worrying issue since 2007, costing the Irish economy millions of euro every year. For the brewing sector, keg theft continues to be a serious problem and is hindering our ability to meet customer requirements by creating unsustainable losses,” Mr Burke said.

“For every keg stolen the cost of providing beer and cider to publicans in this country increases and damages the profitability of breweries. We believe that it is in our shared interest to protect our industry from keg theft”

“With this in mind we would like to prompt all operators of licensed trade establishments in Ireland to remain vigilant of possible keg thefts, and to report incidents of stolen kegs or suspicious activity in relation to kegs to local gardaí,” he said.

In response to an upsruge in reported incidents, gardaí in conjunction with the Garda Metal Forum last year drew up a Metal Theft Crime Prevention and Reduction Plan, aimed at reducing the issue of beer keg theft.

Already, a number of criminal and civil cases have been undertaken against individuals of keg theft.

“Looking forward, we hope an elevation of vigilance amongst licensed trade operators and a series of workable measures can reduce theft and ultimately ensure that empty kegs are returned to suppliers safely,” Mr Burke said.

“This will create a more sustainable position for the industry, allowing us to meet the needs of our customers,” he added.