Warning that small shuttered shops may reopen in campaign of disobedience 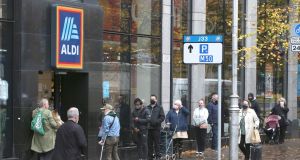 Pictures appeared on social media of queues outside Aldi – with some claiming to have been in line since 6am – for a toy sale on Thursday. Above, a queue on Tuesday at Aldi on Parnell Street, Dublin. Photograph: Stephen Collins

Smaller shops ordered to shutter during the lockdown may reopen in a “campaign of civil disobedience” against huge retail chains still trading in non-essential goods, business leaders are warning.

Isme, which represents smaller traders, said scenes of shoppers queuing outside multinationals for toys on the first day of six weeks of tightened coronavirus restrictions were like a “red rag to a bull” for thousands of stores forced to close.

Neil McDonnell, Isme chief executive, accused the Government of facilitating “a massive transfer of wealth” from crippled small businesses to hugely profitable multiples which are still trading in the likes of toys, clothes and homeware.

“That is what’s happening,” he told The Irish Times.

“The small guys are getting shut down by Government and at the same time Government is allowing really large billion-euro businesses to continue trading.

“I really don’t understand what the long-term objective here is, unless they want main street Ireland to have tumble weed blowing through it in the new year.”

Pictures appeared on social media of queues outside Aldi – with some claiming to have been in line since 6am – for a toy sale on Thursday. The no frills retailers enforced a “dedicated store marshal and ticketing system” to cope with demand.

There were reports of large stores placing items deemed essential – such as food and face masks – among non-essential goods.

Under the latest Government-imposed restrictions, only “essential retail and essential services” are to remain open.

Mr McDonnell said big business was ignoring the rules “hither and yon”, while small businesses are on “artificial life support” through grants and wage subsidies.

“I mean, the absurdity of allowing big stores to sell everything while shuttering small stores,” he said, adding the smaller shop owners didn’t have the financial clout to take on the State in a legal action.

“But I could see civil disobedience,” he said. “I could see some stores deciding they are going to open. I could see store owners saying I am going to trade until the gardaí close down someone who is competing with me down the street.

Mr McDonnell said there was “palpable anger” among smaller businesses.

“This just renders all of this farcical, unless there is some control exerted over this,” he added.

The issue was raised with Tánaiste and Minister for Enterprise Leo Varadkar during a meeting of his department’s retail forum on Wednesday, said Mr McDonnell, adding that small business representatives were “very obviously getting agitated around the table.”

Home furnishings retailer Homestore and More told customers in a telephone message it was “pleased to inform you that our stores are open” but only for products “necessary for the upkeep and functioning of a place of residence at this time”.

Other big retailers like Harvey Norman and Homebase also reported being open to the public on Thursday.

Mr Varadkar said the Government got a commitment from the retail industry that it would not take advantage “by selling products that are not part of their normal sales and that department stores would cordon off the areas where they sell clothes”.

Shops are not allowed to open so they can sell other products, he told Labour’s enterprise spokesman Ged Nash in the Dáil.

“We will enforce this if we have to,” he added.

Minister for Health Stephen Donnelly warned businesses that only those selling essential items are permitted to operate over the next six weeks.

Mr Donnelly said, “It was not fair for big stores to sell food as well as non-essential items”.

This happened in the first wave, he said, and it should not recur.

The Minister said he had heard of a sports outlet that was going to start selling personal protective equipment so that it could also sell its normal sports apparel.

“That is not allowed,” he said. “Such an outlet would be allowed to sell PPE but not the sports apparel.”

A spokeswoman for Lidl said it was an “essential retailer” which also offers “a mixture of hardware, gardening, textiles and furniture – many of which are still permitted under Level 5 guidelines.”

“If Lidl were forced to remove these items from sale it would cause massive logistical issues and would result in our warehouses being overstocked, which would seriously compromise our ability to get essential food supplies in,” she added.

“We can appreciate that this may seem unfair, however we have made every effort to cancel promotion of these items in media and online.”

In a statement, Tesco said it was “adhering to Government guidelines by closing our F&F clothing units across the country.”

Musgrave Group, which runs SuperValu and Centra, said its stores “would carry a small amount of non-food products.”

“We are deeply conscious of the fact that many local stores and family businesses are closed at the most important trading time of the year,” a spokeswoman said.

“We are not opportunistically changing our plans for Christmas. In fact we are actively encouraging customers to shop local this Christmas and support their local stores”

Representatives for Aldi were asked to respond.