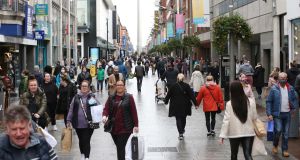 The new Level 5 restrictions will take a heavy toll on jobs and the wider economy. The immediate impact, with probably another 150,000 or more out of work and going on the Pandemic Unemployment Payment (PUP), will be very significant. Beyond that, the prospect, as outlined by Taoiseach Micheál Martin, of further restrictions through 2021 presents a difficult scenario for many businesses.

The hope that we could manage Covid-19 while keeping most of the economy open for most of the time now seems overly optimistic – just a few weeks after the Government’s plan with this very target was published. That said, the Government will have felt it had little option this time, given the sharp rise in virus numbers.

Many twists lie ahead. But the costs of the next six weeks show what is at stake – the unemployment rate could top 20 per cent, the budget deficit will be €1.5 billion higher and the economy is heading into a new downturn. And it is now certain that some businesses will never reopen – and others will do so on a smaller scale.

The restrictions here remain tighter than in most other EU countries. Others may harden their rules further in the weeks ahead, faced with the same dilemma. Here, more needs to be done to explain the rationale and to outline how the Government will proceed in future. In particular, the closure of almost all the non-food retail sector is a major decision with serious consequences for tens of thousands of people. Clearly we need to see fewer people congregating, but the vast majority of retailers have gone to extraordinary lengths to make their premises safe.

If this is the pattern through 2021, with restrictions such as these coming and going, then the Department of Finance’s own forecasts show that there will not be any kind of economic recovery and unemployment will stay at 14 or 15 per cent. Perhaps measures on this scale – or many of them – are necessary in current circumstances, but close attention will now be paid to how other countries handle the same challenges. And we must learn from this too – and from whatever data we have in our own system.

Perhaps the most worrying part of the Government’s presentation is the indication of successive opening and closing of the economy moving into 2021, until a vaccine becomes available. Living with the virus is clearly going to be really difficult, but Ireland must do all that it can, via testing and tracing and trying to develop more targeted and focused restrictions.

The consequences of successive shutdowns on the scale of what is now being introduced are momentous. Economic activity cannot just be switched on and off. Unfortunately, as of now, there is no easy answer to the dilemma of how to control the virus while keeping the bulk of the domestic economy open.