If our economic strategy is open and close and wait for a vaccine, then the dangers are obvious 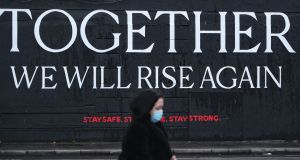 A woman passes a mural in Dublin city centre as the Government prepares to sign off on plans to introduce further country-wide restrictions. Photograph: Niall Carson/PA Wire 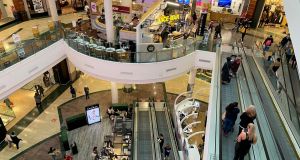 The Irish economic recovery from the first Covid-19 recession looks set to be halted by tough new restrictions.

Not only in Ireland but across Europe there are now fears of a double-dip recession as restrictions are imposed in response to rapidly-increasing case numbers. The economic damage results not only from the immediate impact of the restrictions, which will be substantial, but also from the wider impact on economic confidence.

In deciding to move to a much tougher level of restrictions – under level 5 – the Government is opting to take a higher level of economic cost in the short term ,in the hope that by December the virus levels fall much lower. The call is that it is better to crack down now rather than risk having to later increase restrictions further. Were the virus to spread quickly further that would also bring big economic as well as health risks.

However by shutting down so much of the economy again, the Government is also imposing economic pain.The risk, beyond the initial cost, is that we now appear to be heading for a period of successively opening and shutting large parts of the economy moving into 2021, with big impacts on consumer and business confidence. Taoiseach Micheál Martin referred to this risk in his address .when he said we need a vaccine. A key theme of business reaction to the announcement was the risks this opening and closing would bring.

If our economic strategy is open and close and wait for a vaccine, then the risks are obvious. Confidence would be fragile until a vaccine was in sight. Consumer spending would suffer as would business investment.

As during the initial period in the spring and summer, the restrictions being imposed in Ireland look generally tighter than what will happen elsewhere in Europe. The immediate impact will be on people going back on to the pandemic unemployment payment (PUP), pushing the already stratospheric youth unemployment rate of close to 40 per cent sharply higher.

More than 150,000 people could now move back on to the PUP in the weeks ahead, and the cost to the exchequer of the six-week restrictions is likely to be around €1.5 billion in total, according to official estimates .The PUP has risen from a floor of under 220,000 to close to 250,000 in recent weeks, and could head back towards 400,000.

Beyond that it depends how the situation develops. Department of Finance forecasts, published with the budget, are that successive serious shutdowns on this scale through 2021 would effectively stall economic recovery next year, keep the unemployment rate in the 14-15 per cent range and push the budget deficit €4 billion to €5 billion higher.

We are, of course, a long way from knowing how next year will pan out. The appearance of a vaccine could transform the situation. But in many European economies forecasters now see a danger of a double-dip recession in the fourth quarter of this year as economies head downwards again, albeit not as sharply as the first time. It looks as if the same will now happen here, certainly for the domestic economy and the jobs market.

One strength in Ireland’s position is that much of the multinational sector and parts of indigenous business have kept going, supporting jobs and tax revenues. But the consumer-facing part of the domestic economy will now take a further heavy beating and permanent closures look inevitable.

A key worry will be whether, when activity resumes after the latest restrictions ,some jobs will not come back . Much here may hang on what view employers take of the outlook moving into 2021.

Beyond the immediate shutdown the concern is what business are calling a saw-tooth shape to activity in the months ahead, with successive openings and closures leading to a rise and fall in activity. Chambers Ireland warned that this would be a worst case scenario, with businesses facing successive costs of restocking and reopening.

This kind of pattern would have a heavy impact on business and consumer confidence, and risks a wider spread of recession beyond the most-affected sectors further across the economy.