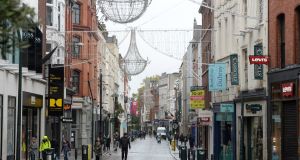 Pent-up consumer demand is “waiting to be released into the domestic economy” once non-essential shops and hospitality businesses reopen, an analysis of third-quarter retail spending in Dublin suggests.

A Mastercard SpendingPulse study produced on behalf of the four Dublin local authorities found that there was a strong but uneven recovery in spending in the Dublin economy in the third quarter, the period before the Republic moved to Level 5 restrictions to curb the spread of Covid-19.

Overall sales increased by almost 22 per cent compared to the second quarter after the easing of the first wave of restrictions improved trading for bricks-and-mortar retailers.

Household goods sales rose 62.4 per cent to exceed pre-pandemic levels, while spending on “necessities” recorded a 5.2 per cent drop after a surge in the second quarter.

Entertainment expenditure also showed signs of a nascent recovery as restrictions were eased during the summer but this was from a very low base. On a year-on-year basis, spending on entertainment was down 44.8 per cent.

Spending by overseas tourists in the Dublin economy was also hammered by Covid-19 travel guidelines.

“Retail activity driven by tourism has been negatively impacted over the summer quarter with the lack of travellers from the US in particular putting a great deal of downward pressure on growth rates.”

Under the Government’s current public health timeline, non-essential shops in Dublin and across the Republic are due to reopen on December 1st.