‘We have gone through closing and the reopening already,’ says optimistic Dublin stylist 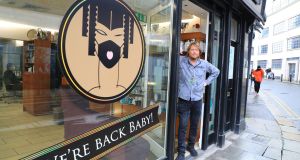 Eoin Wright of Foundation Hair, Dublin: ‘Once the 5km travel limit came in people started cancelling as they felt they couldn’t travel into us from outside the city.’ Photograph: Nick Bradshaw/The Irish Times

Eoin Wright is the owner and head stylist at Foundation Hair in Dublin 2 andfacing another spell of unemployment but is philosophical about the prospects of another lockdown.

He has drawn some comfort from the fact that he has been here before and will be better able to dance the shutdown dance this time around.

“It is what it is and we can’t really do anything about it,” he said. “The only good thing is that we have gone through closing and the reopening already and have put in place the measures that needed to be put in place to allow us to reopen safely so we will be better prepared when that happens in a few weeks.”

He suggested a move up the levels of the Living with Covid plan this week will not make as much a difference as it might otherwise have had have as bookings started to fall off a cliff once Dublin went into Level 3 several weeks ago. “Once the 5km travel limit came in people started cancelling as they felt they couldn’t travel into us from outside the city.”

That is not the only was his business has changed in 2020 with the whole schedule of hair appointments turned on its head since the first lockdown.

Late October and November would normally be a quiet month for salons but Wright said he had been anticipating things would be much busier this year with people placing more emphasis on regular appointments and on timing their visits with the Christmas party season.

He anticipated that there would be considerably more black market home visits by stylists this time around as people would inevitably be less compliant with the regulations now than they were in March, April and May.

“I think that is inevitable and I think it is going to hurt the whole sector,” he suggested.

Like all his staff he will have to rely on the Pandemic Unemployment Payment for the weeks ahead. “That is going to be tough for an awful lot of people but hopefully we will have a timeline that can be followed. It won’t be so bad if we know that on a certain date we will be able to go back to work, once we can see there is an end point it might be okay.”

Dave Price of Perpetua Gym on Dublin’s Windmill Lane was more downbeat about the weeks ahead. “We re-opened at the end of June and had all the measures in place to run classes safely,” he said.

“Then we felt we had to cancel the classes when Dublin moved into Level 3 and now we have to close entirely.”

He said the gym would pivot towards offering online classes in the weeks ahead and stressed the important of exercise for mental as well as physical health.

“We have to run the online classes,” he said. “We could run outdoor classes but with the dark evening and the poor weather I am not sure how appealing that will be for people.”