Initial surveys to begin this year 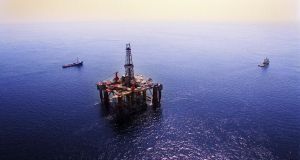 Oil and gas exploration activity in Irish waters looks set to step up following two deals that will see New York-listed Kosmos Energy take a majority interest in three licence areas in the Porcupine Basin off the southwest coast.

The company said yesterday it has agreed separate deals with Canada-based Antrim Energy and London-listed Europa Oil & Gas to buy into licences which the pair already hold over parts of the Porcupine Basin, where multinational Exxon is set to begin exploring shortly.

As part of its deal with each company, Kosmos, has agreed to pay for and carry out three-dimensional seismic surveys of the geology in the three licence areas.

This is the first step in oil and gas exploration as it involves identifying features that could contain either or both.

If it and Europa decide to begin exploratory drilling, Kosmos has agreed to pay all of the cost of the first exploration wells in Europa’s two licence areas up to a cap of $110 million.

Water depths in the three blocks vary between 1,500 and 6,500 feet, meaning that drilling there will be expensive.

As well as paying for and carrying out the 3D surveys, Kosmos said yesterday it would also pay both Antrim and Europa part of the cost of the exploration work carriewd out to date.

He said the company would begin the seismic surveys later this year.

Kosmos is a partner with Irish-based Tullow Oil in the Jubilee field off the coast of Ghana.

It is also involved with Fastnet Oil & Gas in an exploration project off Morocco.

Fastnet has a number of interests in the Celtic Sea.

The company is mainly focused on oil exploration in Africa and South America. It lost $67 million last year.