Women on Air welcomed at RTÉ 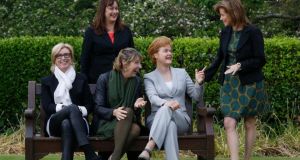 RTÉ’s involvement in the training day was the initiative of the outgoing managing director of radio, Clare Duignan, who said women were less represented on Irish airwaves than they should be “for a number of reasons”, among them “lack of confidence and media experience”.


Presenting rosters
Those speaking at the training day, which was aimed at female professionals in economics, science, technology, the arts and other areas, included RTÉ broadcasters Áine Lawlor and Claire Byrne, former Tánaiste Mary Harney, TV3 political editor Ursula Halligan and Riverdance producer Moya Doherty – none of whom could be said to lack confidence or media experience.

Supporting campaigns to increase the proportion of women contributors to on-air current affairs discussions is an important move by the national public service broadcaster.

But perhaps RTÉ’s next managing director of radio will endeavour to make the presenting rosters on its flagship stations more representative of the population too.