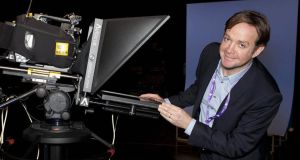 TV3 managing director Pat Kiely said a channel that featured the best of its locally produced programmes and the best of RTÉ’s home-produced content would have a strong international appeal. Photograph: Brian McEvoy

TV3 Group has proposed a partnership with RTÉ to develop a television channel aimed at the Irish diaspora.

TV3 managing director Pat Kiely said a channel that featured the best of its locally produced programmes and the best of RTÉ’s home-produced content would have a strong international appeal.

He made the proposal to RTÉ Television’s acting managing director of television, Dermot Horan, at the Mediacon broadcasting conference in Dublin last week.

“Can you imagine a channel that has Red Rock and Fair City? That has Six One and Vincent Browne?” Mr Kiely said.

The TV3 boss said it made sense for the rival broadcasters to collaborate on a project showcasing Irish television.

As both broadcasters run imported programming to which they do not hold the international rights, they cannot merely replicate their domestic channels in overseas markets. If each broadcaster tried to go it alone on an internationally distributed channel aimed at the diaspora, it would result in many “black pockets” on the schedule, Mr Kiely said.

Mr Horan agreed he didn’t think it was feasible to run an Irish diaspora channel “with one single broadcaster”.

RTÉ has floated the idea of such a channel on several occasions in the past. In its “finance-dependent” five-year strategy statement for the period 2012–2017, it suggested it might launch a new linear channel for the UK-based Irish diaspora called RTÉ Ireland.

TV3 could make a strong and logical partner on a joint venture because its owner since 2015 has been Virgin Media Ireland, and Virgin is in turn part of the cable and broadband group Liberty Global, which has operations in 30 countries and counts Irish-American billionaire John Malone as its largest shareholder.

RTÉ director general Dee Forbes told the Mediacon conference she believed RTÉ should form more alliances with its “frenemies”, which might mean working with competitors on co-productions and in making joint bids for sports rights.