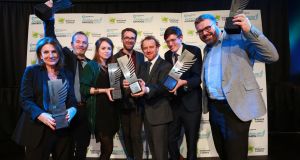 The Irish Times had by far the largest number of entries on the shortlist for the NewsBrands Ireland Journalism Awards 2020, which was published on Monday.

The Irish Times had 35 entries on the shortlist, followed by 24 for the Irish Independent and Sunday Independent.

The shortlist is broken down into 24 categories, and the winners of each category, and the overall winner, are to be announced next month, in an online ceremony.

The Irish Times had three entries in the Covid-19 Journalism category, with Rosita Boland, Patrick Freyne, and the Lost Lives series shortlisted here.

The Irish Times also featured in the Campaigning Journalism category for reports on nursing homes (by Simon Carswell, Jack Power, and Jack Horgan-Jones).

Conor Gallagher was shortlisted in the Crime Journalist of the Year category, and Rosita Boland, Conor Lally, and Sally Hayden were all listed in the Features Writer (Broadsheet) category.

Kathleen Harris, Ronan McGreevy, and Enda O’Dowd were separately listed in the Best Use of Video category, while Louise Lawless is on the shortlist for the Young Journalist of the Year award.

The Irish Times was also nominated in the front-page category for its page one after then taoiseach Leo Vardkar announced the first Covid-19 lockdown in March.