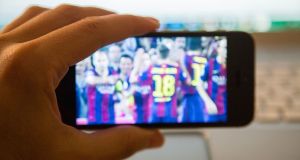 Dublin-based sports technology company Sportdec is looking to close a €3 million fundraising deal in the first quarter of this year to fund the future expansion of its app. Based in Sandyford but registered in Malta (backed by Beanbagsports), the fledgling company was founded by Cork financier Neil O’Leary of Ion Equity and Steven Byrne, a founder of both Risk Intelligence Ireland and MoneyMate. Mr O’Leary is the company’s chairman.

It is led by Briton Bruce Bale, whose career includes executive positions with Sky Betting and Gaming, Facebook (based in Dublin), Viagogo and English Premier League club West Ham United. He is also an international hockey umpire.

Mr Bale said the company’s plan was to “disrupt” the sports industry by having the “best of sport in one place” on its app. “Fixtures and results, all the competitions, news and all of that personalised to users with notifications, etc.” The services include sports betting, which is being offered in partnership with FSB Technology in London.

To date, Sportdec has had more than 50,000 downloads of its app. “We’ll be looking to get another 300,000 in 2017 and over 1.5 million in 2018,” Mr Bale said. Having initially focused on the Irish and UK markets Mr Bale said it would launch globally this year. “We’ll be launching properly in February to the rest of the world.”

Sportdec has so far monetised its offering through betting but Mr Bale said it wanted to offer sports gaming and would look at strategic partnerships. “We would also consider advertising.” On the fundraising, he added: “We feel that now is the right time to look for new partnerships and to consider additional funding. There’s a great opportunity now for us to accelerate our growth having hit various key points in Q3 and Q4 of last year. We’re now open to taking on external funding, possibly up to €3 million.” This would be for a stake “in the region of 20 per cent of the business” and he hoped to complete the round by the end of this quarter.

Launched in August, Sportdec was the number one ranked sports app in Ireland by Apple at the end of 2016 and was a top 30 sports app in the UK. The company has 17 staff in Ireland and Britain. “We have brought in revenue and will look to increase that by five times in 2017. We’re currently targeting to be profitable in 2018 based on the model that we have at the moment.”