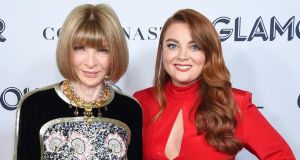 Ending monthly print editions and becoming “digital-led” has helped Glamour magazine respond faster to the major news stories affecting its readers, including Black Lives Matter and the Covid-19 pandemic, according to its US editor-in-chief Samantha Barry.

“I find we have more focus on what we want to do,” said Ms Barry. From Ballincollig, Co Cork, she is the subject of the documentary Fearless: Samantha Barry on RTÉ One on Monday night, with the makers following her around New York as she prepared for Glamour’s Women of the Year Awards, a key event in the Condé Nast calendar.

Ms Barry has recently been overseeing Glamour’s coverage of the killing of George Floyd by a police officer in Minneapolis and the discussion of systemic racism it has raised.

“We have been doing a lot of stories on the people who are protesting and why they are protesting,” she said, speaking to The Irish Times amid further civil unrest and incidents of police violence.

Articles have included how white people can be better allies, how to donate to the movement and – reflecting Glamour’s fashion and beauty origins – a piece on black-owned brands “to shop now and always”.

Distributing its coverage through a daily newsletter and on social media allows for a quicker turnaround than its former print cycle, Ms Barry said.

She was appointed to the much-coveted Glamour role in January 2018 from CNN, where she had been senior director of social news, leading the broadcaster’s social coverage of the 2016 US presidential election and the first year of the Trump presidency – “which means I didn’t sleep”, as she tells the documentary-makers.

Near the end of her first year at the magazine, where she reports to Condé Nast US artistic director Anna Wintour, Glamour had joined stablemates Teen Vogue and Self in announcing the termination of its monthly print edition.

“It was not an easy decision, but it has absolutely been the right one. We had a record April and we are on track for a record May for audience numbers and time spent.”

Glamour US had a print circulation of 2 million at the time, but has since grown its monthly unique users across platforms to 15 million, with video and audio increasingly important in the battle to win audience attention.

Glamour is now present on the famously youthful video app TikTok, where clips showing beauty hacks are popular, while Ms Barry is hosting a series of celebrity interviews called The Chat with Samantha Barry on Instagram’s IGTV.

As well as putting her journalistic stamp on the magazine, Ms Barry has been keen to push greater size-inclusiveness at the title, founded in 1939.

While “the Glamour woman” is most typically in her 20s or 30s, the magazine ages up and down. “The stories about older women are inspiring to the younger women,” she said, citing a much-read feature on then 97-year-old park ranger Betty Soskin.

In Fearless, produced by former Xposé series producer Debbie O’Donnell and made for RTÉ by Stephen McCormack’s Reflektor Media, Ms Barry expresses her desire never to end up “stagnating” in a job.

There has been little chance of that happening in virus-stricken 2020. Running a media brand through a pandemic is “challenging enough”, she said, with the Glamour team already planning the safety logistics of the next Women of the Year Awards, scheduled for November.

The crew was in New York in March for a final few days of filming when the state of emergency was declared, but the documentary had mostly been shot last winter before coronavirus struck.

“New York looks slick and sexy and it looks like the New York of last November,” said Ms Barry. “It was one of the busiest weeks at work, and having a documentary crew around adds to that, but I’m really glad that someone was there to document it.”