Documentary about Rockefeller building workers will hit cinemas in September 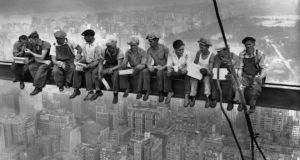 Sónta Films’ documentary Lón sa Spéir is one of four titles in the running for the Scannán / Clár Teilifíse na Bliana (Film or Television Programme of the Year) award at tomorrow’s Oireachtas Media Awards, but the Connemara factual specialists are already on a high after signing a deal with US independent film distributor First Run Features.

The coup means Lón sa Spéir will be screened in US cinemas from September under the title Men at Lunch . The documentary, narrated by actress Fionnula Flanagan, tells the story behind the famous photograph of a vertiginous Depression-era construction site in New York. Originally given the newspaper caption “Lunch Atop a Skyscraper”, it was taken on the 69th floor of the Rockefeller Building in 1932.

For the film’s producer, Eamonn Ó Cualáin, it is not just the Manhattan location but the fact that the workers risking their lives were immigrants that gives the image and its backstory an international appeal. “Most other countries can see their own immigration story in the photograph. It is just 11 ordinary workers having lunch in 1932, but so much is pulled together in that one image,” says Ó Cualáin.


Cinema release
The identity of the photographer and the degree of spontaneity involved have been disputed over the decades – the IFTA-winning Lón sa Spéir examines these questions, explores the historical context of the image and identifies two of the men, tracing them to Shanaglish in Galway.

Commissioned by TG4 and made with funding from the Broadcasting Authority of Ireland and the Irish Film Board, the film premiered at the Galway Film Fleadh last year. It aired on TG4 on St Patrick’s Day and had a limited Irish cinema release in February.