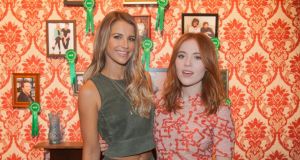 Vogue Williams and Angela Scanlon during an announcement of a new season of programmes on RTÉ Two at RTÉ studios in Donnybrook, Dublin. Photograph: Gareth Chaney Collins

The 1916 centenary looms large for many Irish media groups, but how does a television channel aimed at 15-34-year-olds approach the topic? By commissioning the Rubberbandits Guide to 1916 is the answer.

The “crash course in Irish history” fronted by the comedy hip-hop duo is among more than 30 new and returning series along with 18 new documentaries that will air on RTÉ2 over the next few months.

Among the documentaries destined for its screens are Louise McSharry’s F**k Cancer and Jules Coll’s experience with gastric-band surgery in Nine Stone Lighter, while Baz Ashmawy, more recently to be found on Sky One, will explore his Muslim heritage and how it co-exists with his Irish identity in Baz: The Lost Muslim.

Niall Breslin, aka Bressie, will seek to demonstrate the link between exercise and good mental health in Bressie’s Iron Mind, while Panti Bliss will star in Panti: The Queen of Ireland, a feature-length documentary that has been five years in the making.

The launch of RTÉ2’s autumn-winter season of programming took place on the set of Second Captains Live in the broadcaster’s Studio 4 facility at its Montrose campus in Dublin.

“I have to say, looking around, I feel absolutely ancient,” said RTÉ’s managing director of television Glen Killane as he surveyed what is now a semi-established group of young RTÉ2 “faces” present in the audience. “No other channel in Ireland does what RTÉ2 does,” he said.

Mr Killane highlighted the number of women presenters in the line-up.

“I think it is a really important statement for us to make. There are no token women on RTÉ2. These are strong, articulate women tackling ballsy subjects.”

As well as 2fm DJ McSharry and Damo & Ivor writer-producer Coll, they include Angela Scanlon, Maia Dunphy and Vogue Williams, with the latter set to present a three-part factual series called Mean Girls in which she meets “women who defy traditional perceptions”.

RTÉ2 channel controller Bill Malone said the broadcaster had taken steps in recent years to respond to the concerns about a lack of women on air. “If anything, we are looking for more men now,” he said.

Mr Malone, who oversaw a rebranding of the channel from RTÉ Two to RTÉ2 a year ago, said RTÉ had conducted research into its key 15-34-year-old target audience, “not what they want to watch, but who they are”.

He has commissioned an Irish version of the hit international format First Dates, a new series called Après Match of the Day that will revisit “the glory days of Irish sport”, and Wasted, which will examine the lives of twenty-somethings on low incomes.

There will be more Second Captains Live, more Don’t Tell the Bride, more Meet the McDonaghs and more Republic of Telly, which has now also spawned a spin-off comedy series featuring two of its characters, 80s pair Bridget and Eamon (Jennifer Maguire and Bernard O’Shea).

International acquisitions include the next series of Homeland and a new German drama set during the cold war called Deutschland 83. In a scheduling move designed to limit the loss of younger viewers to piracy, both dramas will air on RTÉ2 within days of their broadcast in the US.

1 Majority of employees don’t want to return to pre-Covid working patterns
2 Homeworking is depriving me of juicy gossip
3 Primark rejects £30m bonus for bringing back staff
4 If tourists are such pariahs should we not be testing them on arrival?
5 Tobacco giant’s menthol-ban substitutes take 5% share of Irish market
6 Investors in Irish solar energy fund in line for €20m payout
7 ‘My rent here is so low it’s a joke’
8 Norwegian airline sued in Dublin by inflight caterer
9 Varadkar and Donohoe to meet banks to discuss mortgage breaks
10 Government should set a benchmark for any permanent increases in spending
Real news has value SUBSCRIBE