RTÉ: Who will succeed Noel Curran as director-general? 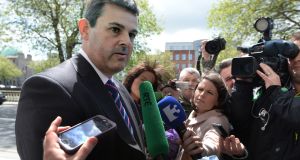 Kevin Bakhurst, former controller of the BBC News Channel has to be seen as the favourite for the RTÉ director-general role. Photograph: Cyril Byrne

The former controller of the BBC News Channel has to be seen as the favourite for the director-general role. The Englishman joined RTÉ in 2012 as managing director of news and current affairs, with the task of restoring morale and audience faith in the department in the wake of two scandals, and he was subsequently appointed deputy director-general. Bakhurst has the requisite cool head for the role and is also a savvy communicator.

There may be some reservations about him not being Irish, but he is unlikely to be overlooked on this basis. In any case, the first person to hold the title of RTÉ director-general, Edward J Roth, was American.

A few years ago, Killane was heard demurring from the idea that the next entry on his CV would be RTÉ director-general, but he may well have changed his mind since then. The managing director of RTÉ Television - the organisation’s biggest division and its most important commercially - will be aware that the last three director-generals all headed up television in their time, making his current job the tried-and-tested springboard to the top one.

The personable Killane has made some smart political moves within RTÉ since graduating from his previous role in the organisation as head of sport and he frequently represents the broadcaster at public events.

Laffan has been managing director of RTÉ Digital since 2011 and sits on its executive board. Before joining RTÉ as executive director of RTÉ Publishing in 2001, Laffan spent 13 years working at advertising giant McCann in New York, giving her a broad outlook on the increasingly global media business.

She has been responsible for the acceleration in RTÉ’s digital activities, with the organisation launching and continually developing the RTÉ Player and its various apps.

RTÉ’s digital revenues are still relatively modest compared to those of television, but the future is digital, as the media mantra goes, and so Laffan’s expertise is highly suited to the challenge ahead.

As chief executive of TV3 Group since 2006, McRedmond kept the show on the road for RTÉ’s biggest television rival during a sharp, multi-year plunge in the television advertising market, making a series of astute senior appointments and keeping costs under stringent control - while taking the odd risk too.

Now that TV3 has been sold by private equity group Doughty Hanson to Liberty Global, there is a sense that his work at Ballymount may almost be done.

Over the years, McRedmond has picked his battles with RTÉ, but he has frequently said he believes in the importance of a public service broadcaster underpinned by public funding. He is the most obvious external contender.

The managing director of RTÉ Radio has a lower profile than some, but plenty of experience across the organisation. The RTÉ “lifer” has worked for the broadcaster for 30 years in both radio and television, with his career spanning current affairs and entertainment.

As head of radio, he also oversees the RTÉ Orchestras, Quartet and Choirs, giving him responsibility for an often underappreciated element of RTÉ’s remit.

The former chief executive of Today FM between 1999 and early 2012 has been group commercial director of RTÉ since leaving the Communicorp radio station. Like Bakhurst, Killane, Jennings and Laffan, he sits on its executive board.

During his tenure, RTÉ has toughened up in the fight for commercial revenues during a very difficult period for the media market.

While the ebullient O’Reilly made his name in the commercial sector, he began his broadcasting career in an era when RTÉ was the only option, working there for 18 years from 1981, during which time he was executive producer of The Gerry Ryan Show.

1 Why are markets booming when a crash is on the way?
2 Nine more suing INM and Leslie Buckley over alleged data hacking
3 Restaurants file court actions against insurers over lockdown losses
4 Columbia Sportswear defies gloom with first Irish standalone shop
5 David McCullagh announced as co-host of RTÉ Six One News
6 How to further divide the economy using the wage subsidy
7 ‘The rental situation stops me moving back home’
8 Brexit: System agreed for Irish goods to skip checks on UK trade
9 ‘It’s been so long since I’ve had cash, I’m beginning to forget what it looks like’
10 Red tape logjam creates fear for Irish timber supply
Real news has value SUBSCRIBE