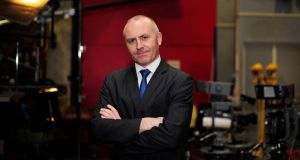 There has been some good news for RTÉ lately. Semi-State oversight body NewERA reported back to the Government that the scope for further operational “efficiencies” within the broadcaster was “limited”.

But that doesn’t make everything nice and comfortable for Glen Killane, the managing director of RTÉ’s biggest business unit – television. The estimated €30 million-plus lost to licence fee evasion “would make a huge difference” right now, he says, stressing that some of that money would trickle out to the independent sector through RTÉ commissions.

“If people want content like GAA coverage and Love/Hate and The Late Late Show and news and current affairs and the whole range of programmes we do, then all of that has to be paid for,” he says.

“If it is left on the long finger more cuts in output will have to be made . . . I don’t want to sound a negative note, but these things have to be addressed,” says Killane.

“I’m not prepared to manage decline,” he adds.

While there has been a modest uplift in the fortunes of the television advertising market this year, a total of 43 overseas channels now sell ads in the Republic, chipping away at the market share of the indigenous broadcasters.

Killane says he welcomes the arrival of UTV Ireland, which will at least produce some local content, he notes. Rather, it is the dozens of overseas advertising opt-outs (most of which are owned or sold by BSkyB) that are the problem. “Thirty-five of them are not contributing anything to the creative sector here.”

Despite this “cluster” of challenges, Killane says he is looking forward to RTÉ’s new- season slate of drama, family entertainment and documentaries, though he is careful about giving too much away about the planned “new look” for The Late Late Show.

With programme funding remaining tight, RTÉ will be pursuing more co-productions with independent producers and other broadcasters, he says. “What I’m saying to my people is: ‘Budgets are tight, but if you have an idea, don’t be put off. Let the budget RTÉ has be the starting point, not the end point.”

RTÉ has been working on a number of comedy co-production proposals featuring rising Irish comedy talent, he says, adding that it “can be frustrating how long these things take to get to screen”. He believes the appointment last year of Eddie Doyle, the former RTÉ Two commissioning editor, as head of comedy has begun to turn around RTÉ’s “patchy track record” in the genre. “Comedy is very hard to crack,” he admits.

On RTÉ One the two main locally produced comedies are satirical sketch shows that made the leap from radio to television: Irish Pictorial Weekly and Callan’s Kicks. RTÉ has been happy with the viewership attracted by the latter, which has been going out on Friday nights during The Late Late Show’s break.

“With a budget challenge there’s a real temptation to walk away from the summer, but I don’t accept that,” says Killane, who cites the series The Shelbourne as another example of summer programming that performed well.

RTÉ One is Ireland’s most-watched television channel by some distance, typically recording an audience share of close to 20 per cent. The channel will get a new controller in November when Adrian Lynch, the owner of Animo Television, joins the broadcaster. Animo is the maker of entertainment programme Ireland’s Fittest Family, which is due to return to RTÉ One screens for a second season, and it has also produced the forthcoming RTÉ One documentary series Pornation and the RTÉ Two docusoap series Connected.

And as for RTÉ Two, it tends to have viewing figure woes in the years when it is deprived of major football tournaments and a revamp of the channel is on the way, with details due to be unveiled next month.