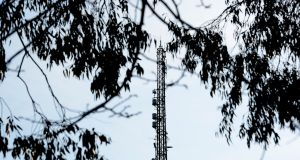 The company, RTÉ Transmission Network DAC, maintains and develops the broadcast transmission network for all broadcasters in Ireland and also provides mast and tower rental services to telecommunications companies.

The subsidiary paid a dividend of €20 million to its parent RTÉ during the financial year.

In accounts filed to the Companies Office, the directors note that revenues for the business have been affected by the consolidation of mobile phone networks and that achieving growth in this business remains “challenging”.

2rn carries a key element of the loss-making RTÉ’s debt, with the subsidiary having outstanding borrowings of €49.5 million as of the end of 2017.

The sum relates to its role in developing the digital terrestrial television (DTT) network ahead of the switch-off of analogue signals in 2012. This was paid for using a project finance loan from Barclays Bank Ireland.

RTÉ recorded an operating deficit of €6.4 million in 2017, although it was helped by a net gain of €78.5 million from the sale of land at its Montrose base in Donnybrook in Dublin.