Murphy has been appointed political coverage editor by RTÉ 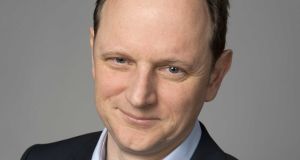 RTÉ business editor David Murphy will be leaving his position to take up a new role as political coverage editor.

Mr Murphy’s new role will take him away from television and radio to a behind the scenes role across RTÉ’s political coverage which encompasses bulletins on radio, television and online as well as programming including the Week in Politics.

Mr Murphy takes over as political coverage editor from Richard Dowling, formerly a north-east correspondent with RTÉ and programme editor of Morning Ireland. Mr Dowling has taken up a position as RTÉ’s freedom of information officer.

It is understood the role of business editor will now be the subject of an internal competition and a replacement for Mr Murphy will be appointed in due course.

Mr Murphy joined RTÉ in 2005 from the Irish Independent newspaper and, during his tenure, has won awards for business journalism. He is the co-author of a book accounting the Irish banking collapse and has presented television documentaries on Tony O’Reilly and Tony Ryan. He was appointed business editor in 2009.

It is understood Mr Murphy will take up his new role in May.