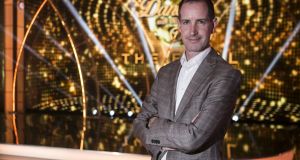 Adrian Lynch: A key part of his job is to deliver big television hits at RTÉ.

With the last of the golden Dancing with the Stars ticker tape swept up, RTÉ One and RTÉ 2 controller Adrian Lynch is in talks with Shinawil, the independent production company that made it, about a second series. “We’re negotiating that at the moment,” Lynch says, speaking just before the final rehearsal on a sunny Sunday in Bray. It hasn’t just been recommissioned then?

“Typically what would happen is that you evaluate at the end of the series. But we’re really happy with the outcome,” he says. It would be “commercially sensitive” to say anything more.

On air that night, the presenters talk about “next year” as if it is a done deal. And it will surely be back. RTÉ’s version of the BBC Worldwide format is a risk that has paid off.

The series had an audience average of 587,000 in the consolidated ratings (which includes time-shifted viewing that takes place within a week) and an average audience share of 40 per cent. This means it attracted about 100,000 more viewers per episode than the final series of The Voice of Ireland, which it replaced in the Sunday teatime slot.

It also had more of two things that broadcasters like RTÉ love: social media “talkability” and cross-generational appeal.

Commissioning DWTS was “quite a big decision” for RTE, says Lynch, who has been spending each of the last 12 weekends on set at the Ardmore Film Factory at the back of an IDA business park. “We were making an Irish version of the UK’s most successful show. There’s a certain expectation in people’s minds about what it’s going to look like.”

While DWTS cost 15-20 per cent more to make than The Voice of Ireland (which was also produced by Larry Bass’s Shinawil), the budget was about a fifth of what the BBC spends on Strictly Come Dancing.

“BBC Worldwide have brought other international productions to Ireland to look at this as an exemplar of how it can be done on a cost-efficient basis.”

RTÉ, in case you missed it, is under some serious financial pressure. The decision to outsource children’s television programming to the independent sector is a small taste of a much bigger retrenchment in its workforce.

Lynch himself is not too long in the door. In late 2014, he left his production company Animo to take up the RTÉ One controller job. “Adrian has made his presence felt around RTÉ,” said Ryan Tubridy the following year. “He’s extremely tall.”

The biggest non-sport show on Irish television so far in 2017 is Room to Improve, which has an average consolidated audience of 628,000

A key part of his job, as he sees it, is to deliver the “big properties” that appeal to “all demographics” – in other words, the hits. “Obviously as a public service broadcaster, we show a diverse range of programming. But also . . . people want big shows. Do you know what I mean? There’s a desire for premium content.”

The biggest non-sport show on Irish television so far in 2017 is Room to Improve, which has an average consolidated audience of 628,000, while Lynch is also happy with the performance of the four-part Amy Huberman legal drama Striking Out, and The Tommy Tiernan Show, the Thursday night chat show with a format of simple genius – Tiernan has no idea who the guests will be.

Striking Out will be back for six episodes next year, giving RTÉ its first returning drama for some years. “The creative process is 1 + 1 = we all don’t really know,” says Lynch. “It’s not predictable. But if something lands, then the building blocks are there now for a second series.”

He has also “doubled the order” for Tiernan’s show to 12 episodes. “I think people just really liked how authentic the format was. And Tommy is a brilliant interviewer.”

Indeed, it lived and died on how good he was. Elsewhere in male-fronted chat, Lynch says The Late Late Show will remain RTÉ’s most commercially important show in five years’ time, even if it’s “not a show you would necessarily design if you were starting again”, while The Ray D’Arcy Show is “doing better” in its second season.

Lynch notes “against the grain” growth in audience share over the past 15 months on both RTÉ One and RTÉ2, although the latter was undoubtedly helped in 2016 by the suite of big sporting events. “It’s a key factor, yeah, but sport is a key offering on the channel – it is not separate from it.”

But RTÉ2 is definitely tricky. Its one undoubted non-sport performer is First Dates, which gets more than 250,000 viewers.

“One thing I personally like about First Dates is that it drives the diversity agenda without actually ramming it down people’s throats – it’s just there, and it’s a part of life,” says Lynch. “It’s great television with diversity at its heart, rather than the other way round.”

From October, the role of managing director of television (held on an interim basis by Dermot Horan) will disappear

The channel was added to his responsibilities just last July after former controller Bill Malone left RTÉ for TV3 – one of three senior departures in the wake of Dee Forbes’s appointment as director-general.

More executive reshuffling has been scheduled. From October, the role of managing director of television (held on an interim basis by Dermot Horan) will disappear, as will those of radio and digital. They will be replaced by a head of content, announced as the current radio boss Jim Jennings, and a director of channels, audiences and marketing, for which an open competition has just begun. It is expected that this person will have the most power, as he or she will be the one to control budgets and commission programmes, either from in-house or the independent sector.

Whoever gets the job, there will be some cloth-cutting to be done. “Across RTÉ at the moment, we are evaluating all of our content by genre. There is a detailed content analysis going on, and that will shape the priorities,” says Lynch.

One issue viewers can’t help notice is that the repeats seem to start earlier each year – while RTÉ may have its hits, there aren’t enough of them, it seems, to fill two channels for 12 months. The two-hour slab of DWTS, for instance, was repeated twice during the week.

There are new shows coming up between now and the next proper “season” in September, including two BBC-commissioned dramas featuring Irish talent: Paula, a three-part revenge thriller by playwright Conor McPherson and EastEnders spin-off Redwater. Independent Pictures has made the two-part documentary Ireland’s Property Crisis, while the dairy-themed family viewing of Big Week on the Farm will be stripped across RTÉ One all next week.

Repeats can’t be helped, however. “It’s no secret that we are financially challenged,” says Lynch. “People talk about the number of repeats, but every broadcaster has repeats. Channel 4 has repeats. Even the well-funded broadcasters in the UK have repeats – it’s part of the schedule.”

1 Donohoe’s new role, House of Ireland shuts, and being indispensable at work
2 ‘Sad day’ for House of Ireland as tourism retailer goes out of business
3 ‘My rent here is so low it’s a joke’
4 Paschal Donohoe’s election as Eurogroup president ‘a great win for Ireland’, says Taoiseach
5 Caveat: The tourism sector deserves to be taken more seriously in this crisis
6 Donohoe’s new role puts State at centre of debate over EU’s future
7 The €1 billion market: retailers who serve tourists face double trouble in a pandemic
8 Gardaí raid Irish office of failed German payments group Wirecard
9 Remote working: How to get ahead in a changed world
10 Water supply problems are not of Irish Water’s making
Real news has value SUBSCRIBE

Dalata agrees new debt facility as it recovers from Covid-19 07:58
Donohoe’s new role, House of Ireland shuts, and being indispensable at work 06:30
Getting back to business after the Covid-19 shutdown 05:56
The €1 billion market: retailers who serve tourists face double trouble in a pandemic 05:50
Nominees announced for third Irish Times Business Awards 05:45
Search executive
jobs on irishtimes.com