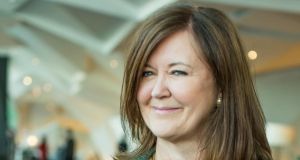 Múirne Laffan: led the development of the RTÉ Player, the RTÉ News Now app and the broadcaster’s website

RTÉ is standing down the role of chief digital officer after Múirne Laffan on Thursday announced her decision to leave the broadcaster next month.

Ms Laffan, who is also a member of RTÉ’s executive board, has been in the role since 2015. She joined RTÉ in 2001 as its general manager of commercial enterprises.

RTÉ’s director general, Dee Forbes, paid tribute to Ms Laffan for her role in spearheading the RTÉ Player, the RTÉ News Now app and GAAGO, the international online subscription service that the broadcaster runs with the GAA, as well as her role in the evolution of the RTÉ website.

“We are grateful to Múirne for this significant contribution to the industry and to RTÉ. We wish Múirne continued success as one of Ireland’s most experienced digital leaders,” Ms Forbes said.

Ms Laffan worked at Universal McCann in New York before joining RTÉ, and during her 16 years at Montrose has also served as executive director of RTÉ Publishing and managing director of RTÉ Digital. She is set to leave on August 11th to pursue other interests.

“RTÉ is on a journey of transformation and is now on the cusp of integrating digital activities into all content and production pillars. It is the right time to do this, and also the right time for me to explore new opportunities and to bring my knowledge and experience to other businesses. I believe that with Ireland ever more a key player in the global digital ecosystem, the time is now,” Ms Laffan said.