Six companies make programmes worth €18.5m, as 1 in 7 pitches is commissioned 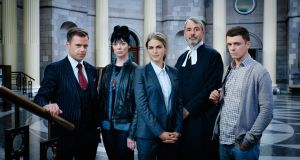 Legal drama ‘Striking Out’ starring Amy Huberman (centre), made for RTÉ by Blinder Films, was shown earlier this year. It will return for a second series. 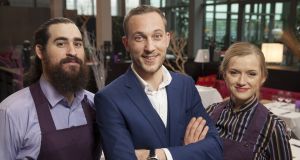 RTÉ received 884 pitches for television programmes from independent production companies last year and commissioned 130 of them, or about one in seven pitches, generating 421 hours of television.

Six production companies were awarded €18.5 million or 48 per cent of the value of new RTÉ television commissions from the independent sector in 2016, the RTÉ Independent Productions annual report shows.

A further six companies were awarded commissions worth €8.2 million, meaning 12 companies accounted for some 69 per cent of RTÉ television commissions.

RTÉ spending on independent television and radio commissions in 2016 was €40.3 million, the report states. This slightly exceeded the public service broadcaster’s statutory obligation to spend €39.5 million on programmes from the sector in 2016.

Ireland’s independent production sector was hit hard during the recession as RTÉ slashed its budgets in response to a collapse in advertising revenue. In 2007, its spend on independent commissions, at €80 million, was twice as high as it is now, while there has been little recovery in recent years.

Total spending in 2016 broke down into €39.1 million spending on television commissions and €1.2 million on radio. There were no new radio commissions awarded, as the pitching process took place late in the year, but 18 programmes were recommissioned, delivering 300 hours of radio.

The report does not detail the value of the commissions, but some of the most prolific independent television producers include Shinawil, Vision Independent Productions, Coco Television and Independent Pictures.

Shinawil, led by chief executive Larry Bass, is the company that makes Dancing with the Stars, a BBC format acquired by RTÉ last year and broadcast for the first time in 2017. It previously made another local version of an international format, The Voice of Ireland, for RTÉ.

Coco Television makes First Dates Ireland and Don’t Tell the Bride for RTÉ2, while Independent Pictures produces factual shows from Keeping Ireland Alive: The Health Service in a Day to Big Week on the Farm.

As drama is an expensive genre to produce, a significant proportion of RTÉ’s independent production expenditure will have gone to the companies behind the dramas Striking Out (Blinder Films), the forthcoming Rebellion sequel Resistance (Zodiak Media Ireland / Touchpaper TV) and Acceptable Risk (Soho Moon Pictures / Saffron Films).

All three dramas had other sources of finance alongside RTÉ. The report shows that RTÉ commissions received €8.2 million in total third-party funding, with drama and animation accounting for €6.1 million of this.

RTÉ commissions also benefited to the value of €7.6 million from the Government’s Section 481 film and television tax credit and received €3.6 million in funding from the Broadcasting Authority of Ireland.

The broadcaster has drama development contracts in place with Blinder Films, Element Pictures and Ripple World Pictures, the report states.

In 2016, RTÉ spent €11.2 million on entertainment, comedy and music commissions from independent companies, €9.4 million on drama, sport and young people’s programming and €8.4 million on lifestyle and other formats.

Some €5.8 million was spent on regional, education, religion and other factual commissions, while just €1.7 million was awarded to arts and documentaries from independents.

Last November, RTÉ announced that it would outsource all of its young people’s programming to the independent sector.

Its latest commissioning call highlights a “particular interest” in co-productions with broadcasters or producers in other countries that “deliver material reflective of and relevant to youngsters living in Ireland” in a cost-effective manner.

RTÉjr is also seeking proposals from independent producers for a live event for children under the age of seven and their families.

The event, which will have a maximum budget of €150,000 and will be broadcast in autumn 2018, is expected to “create news and media interest” and “put children on a pedestal for the day”.