Revealing ‘precise details’ of O’Brien’s affairs was ‘on the wrong side of the line’, court hears 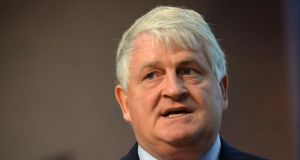 Lawyers for businessman Denis O’Brien have told the High Court he has brought an injunction application against RTÉ “as a matter of principle”.

Explaining why his client is trying to prevent RTÉ broadcasting a report about his loans with IBRC, Michael Cush SC said there were two reasons why Mr O’Brien had brought the action.

Firstly, Mr Cush argued that expert testimony would show that the story would “damage him commercially in a way he will never be able to prove”.

“Secondly, if he lets this go, what’s next? Where does the confidential information stop, once you allow disclosure once?”

Mr O’Brien is seeking an injunction against RTÉ in relation to a story it was originally supposed to broadcast on May 1st.

The story is based on a letter Mr O’Brien wrote in October 2013 to Kieran Wallace, the KPMG special liquidator of the State-owned bank, IBRC.

The bank has joined Mr O’Brien in seeking an injunction against RTÉ in a case being heard by Mr Justice Donald Binchy, who imposed a reporting restriction covering details of Mr O’Brien’s IBRC finances.

RTÉ is opposing the application.

Mr Cush said Mr O’Brien is “acutely aware “ that he had brought more attention on the RTÉ story by bringing an injunction application.

“Some people will always believe he is trying to hide something,” said Mr Cush.

Mr Cush said “the fact” that Mr O’Brien had “sought an extension” to his IBRC loans is “no longer confidential” due to a Dáil speech by Catherine Murphy TD.

But he said the revealing of the “precise details” of Mr O’Brien’s financial affairs was “on the wrong side of the line” for RTÉ’s public interest defence that the story is an important account of governance at IBRC.

Michael Collins, counsel for the bank, said he supported all of the arguments put forward by Mr O’Brien’s legal team.

He said IBRC had a right to privacy along with Mr O’Brien. The bank’s counsel added that a free press had to balance individual privacy rights with the public’s right to know.

He said a distinction had to be made between the public interest, and what the public is interested in.

He added that Mr O’Brien’s private finances are a “flimsy, gossamer like” link to any story purporting to be about the bank’s corporate governance.

“The freedom of the press cannot trample over the rights of a private customer on tenuous links,” said Mr Collins.

David Holland SC for RTÉ said the bank was “obsessed” with whether the broadcaster had accessed IBRC’s legal advice over its dealings with Mr O’Brien.

He said the bank and Mr O’Brien paid “lip service” to the right of freedom of expression, but that they hadn’t considers it enough in this case.

In an affidavit to the court, Mr O’Brien said expert testimony backed up his claim that his reputation with banks would be “irreparably” damaged if RTÉ broadcast its story.

“It is clear that RTÉ is using my private banking affairs to promote its story (on IBRC),” Mr O’Brien said.

Large parts of the affidavits being read in court have been blacked out.

The case continues today in the High Court.