‘Key figure’ to depart in June, with Jim Jennings installed on interim basis 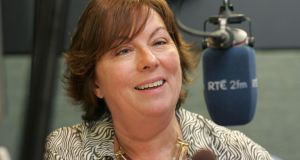 Clare Duignan said she planned to spend more time in her roles in the Jameson Dublin International Film Festival and Business to Arts after her contract as managing director of RTÉ Radio ends. Photograph: Frank Miller

“I took the decision some time ago. I’ve had a long, long career here in RTÉ,” Ms Duignan (57) said. During her time at the broadcaster, Ms Duignan spearheaded the development of RTÉ Television’s independent production unit and served as director of programmes in television before being promoted to the radio job in February 2009. This made her the longest-serving continuous member of the RTÉ executive board.

Ms Duignan said she planned to spend more time in her roles as director of the Jameson Dublin International Film Festival and Business to Arts as well as committing to new projects in the arts and media world.

RTÉ director general Noel Curran described Ms Duignan as “a key figure in RTÉ” who had been “a passionate advocate for the public service”.

Ms Duignan last year accompanied Mr Curran and RTÉ chairman Tom Savage to an Oireachtas committee hearing into the A Mission to Prey libel, during which she defended the organisation against the suggestion that it was locked in groupthink.

“I just felt that the allegation made was a very sweeping allegation against all the staff of RTÉ, and that it was unfair,” she said.

The change at the top of RTÉ Radio coincides with the appointment of a new head of 2fm, Dan Healy. On the question of whether RTÉ will maintain its number of radio stations in the future, Ms Duignan said she believed listeners “want and expect a suite of services from RTÉ”, but acknowledged that the market was “challenging”.