RTÉ out of its league in the battle for sports rights 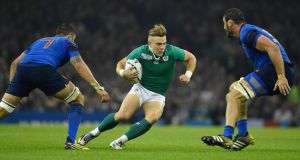 There’s been no disguising RTÉ’s wounds following its loss of Six Nations rugby rights to TV3.

To borrow an analogy from another sport – one it still has a grip on – RTÉ is like Brazil in the last football World Cup. Expected to do better, the once-invincible force leaves the pitch with tears in its eyes and the very real sense that it has been hammered. The signs of its impending defeat may have been there all along, but when the final whistle blew, the result still came as a body blow.

Oh dear. But if RTÉ was suffering, and TV3 was gleeful, from Minister for Communications Alex White there was the sweet scent of relief.

Not for Mr White any grousing about the volume of ads on TV3, set by the regulator at a maximum of 12 minutes per hour. The Six Nations deal, which covers the tournaments from 2018 to 2021, was instead “a positive development, which will be warmly welcomed by rugby fans across the country”, he said.

This wonderfully glossed over the sensitivities of many rugby fans, who – accustomed to RTÉ’s six minutes per hour of ads – will in future have to fill the difference at half-time with their own armchair analysis or go and put the kettle on.

The Minister’s exhale is prompted by a single fact: TV3 is a free-to-air broadcaster. As live coverage of the Six Nations is not currently designated as one of his department’s “major events” that must, by law, be broadcast on a free-to-air channel, the rights could have gone anywhere.

Now that TV3 has emerged victorious, the Minister does not have to take a decision, or rather he can decide to keep the Irish Rugby Football Union (IRFU) onside by keeping live Six Nations matches off the list, while simultaneously avoiding the kind of national distress generated by Sky’s foray into GAA rights.

The IRFU couldn’t be more against a change in the designation of the Six Nations, because it would weaken its bargaining power with rights bidders. But from broadcasters’ perspective, the competition is a lot stiffer anyway.

TV3, in the process of being acquired by Liberty Global, is blessed with the capacity to take bigger bets. ITV, in a scenario where it keeps UTV Ireland, could conceivably use sports rights as the tactic to draw viewers to the channel.

Even in pay-TV land, things are more complex than previously. Sky, accustomed to having the English Premier League almost entirely to itself for so long, now has to contend with a serious rival in the shape of big money spenders BT.

Why this great scramble for sports rights? In the age of the splintering audience, where disloyal eyeballs wander from television screen to mobile screen to tablet, content that reliably attracts mass viewerships has swollen in significance to advertisers.

The value of sport to broadcasters that depend on advertising revenues has gone up. At the same time, the convergence of the television business with the telecoms industry has created a new type of bidder – companies like BT use exclusive premium content to sell broadband subscriptions. The result is inflated price tags.

RTÉ, for all its centrality to Irish culture, simply competes in a lower financial league than that of global media players like Liberty Global. As the parent of Virgin Media (known in Ireland until recently as UPC), Liberty collected revenues of €351 million from Virgin/UPC’s customers in Ireland last year. This exceeded RTÉ’s total licence fee-supported revenue by €23 million.

Now Liberty has possession of TV3 to go alongside its 9.9 per cent stake in UTV-buyer ITV. In the Irish context, it is one powerful company.

Nor does its influence end there. Irish-American billionaire John Malone, Liberty Global’s largest shareholder, is also the dominant shareholder in Discovery Communications, the Eurosport owner that has played its own role in battering public broadcasters by winning control of Olympic Games rights across most of Europe from 2018.

A Liberty takeover of ITV, and stronger link-ups between Liberty and Discovery, are distinct possibilities. For a public broadcaster such as RTÉ, such handshakes between giants would be a very bad day at the office indeed. RTÉ may have put its “heart and soul” into rugby, but the game is now too rich for its blood.