Government says it will look for further ‘efficiencies’ from broadcaster 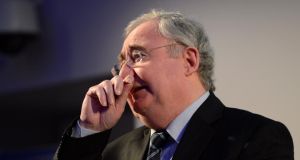 The Government is considering an increase in the amount of public money it gives to RTÉ, but has announced it will look for further “efficiencies” in how the broadcaster operates.

The Broadcasting Authority of Ireland has recommended that RTÉ receive additional public funding, but has said its commercial activities should be reduced. However, it has rejected TG4’s call for more public funding.

In a five-year review of public service broadcasting in Ireland, the authority says RTÉ needs more money to make “additional programming” and stay relevant. But it suggests its commercial behaviour - which might include the number of permitted advertising minutes - should be further restricted in order to give competitors such as TV3 and Setanta Ireland access to a greater share of advertising revenue.

The authority also recommends an “urgent change” to legislation that would allow an increase in the number of minutes of advertising on commercial radio.

Minister for Communications Pat Rabbitte said the Government will ask its New Economy and Recovery Authority (NewERA) body to identify further cost cuts in RTÉ. This will include “an examination of achievable efficiencies” in the operation of the five musical ensembles in its performing groups division and the manner in which it delivers Irish-language radio services.

Mr Rabbitte said he would shortly begin a public consultation on the new public service broadcasting charge, which will not be tied to ownership of a television set. The Minister described licence fee evasion as “significant” and was in the order of €30 million or around 18 per cent.

“Public service broadcasting in our society is important and therefore it is fair from where I’m sitting that all of us make a contribution, not 80 per cent of us,” he said.

“If you believe in the concept of society, and some people, originating with Mrs Thatcher, don’t... then you believe that the character of society benefits from genuine public service content.”

The rate of the new charge will not be higher than the existing €160 annual licence fee for households, the Minister confirmed, although the possibility of higher rates for businesses is under consideration.

The new charge, which the Minister hopes to introduce by the end of 2014, is unlikely to be collected by An Post. “It seems to me that the merit of transitioning to a household-based charge would be undermined if the collection mechanism wasn’t improved,” Mr Rabbitte said.

The five-year plan submitted to the BAI by TG4 envisaged “considerable” additional public funding “that simply is not available at the present time”. The Minister said TG4 has been asked to revise its strategic plan.

He said funding for the Irish-language television station, which secures around 92 per cent of its funding from the taxpayer, was “likely to stay flat”.

Crowe Horwath, the consultants that co-ordinated the five-year review for the BAI, said they found it “rather surprising” that RTÉ had proposed in March to transfer its children’s programming from RTÉ Two to RTÉjr and replace it with adult programming that would show advertising. This was “a significant shift” from the plans for children’s programming outline in the five-year plan submitted by RTÉ, which had “contained rather vague proposals for RTÉjr Television”, it said.

“There’s a slap on the wrist in there somewhere for RTÉ,” the Minister said.

Asked about the future of loss-making limbs of RTÉ that do not have a public service mission, such as 2fm, the Minister said it was not for either him or the consultants to make policy decisions on behalf of RTÉ, but he added that “everything at RTÉ has to be put through the ringer”. However, deep cuts made by RTÉ management to date had been “lost in the noise about the stars”, he added, referring to the outcry about the levels of pay awarded to RTÉ presenters.

In 2011, RTÉ earned €167 million in commercial revenue and received €184 million in licence fee money. Its annual report for 2012 will be published shortly.