Cantillon: National broadcaster is being squeezed out of the premium live sports market 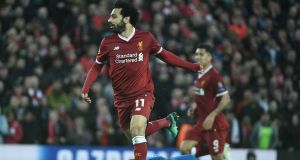 Liverpool’s Mo Salah scores against Roma during the Champions League semi-final first leg. RTÉ has lost the rights to broadcast the final on May 26th. Photograph: Filippo Monteforte/AFP/Getty Images

It was another bad week for RTÉ on the sporting front, as rival TV3 netted the Irish rights to 327 Uefa Champions League and Europa League games for the next three years.

RTÉ will get to show 16 matches on a Tuesday night, but it has lost the right to show the Champions League final, a blow to staff morale as much as ratings.

Increasingly, RTÉ is being squeezed out of the market for premium live sports due to a combination of price inflation and its own funding constraints.

This year was the first that it didn’t broadcast the Six Nations rugby tournament, having being outbid by TV3, which is backed by the deep pockets of Virgin Media and its billionaire owner, American businessman John Malone.

Ireland winning the Grand Slam rubbed salt into the wound.

The BBC has experienced a similar phenomenon in the UK over the past 20 years.

RTÉ chief Dee Forbes has been warning for some time about the cash crunch facing the broadcaster. Its commercial income has fallen by 36 per cent or close to €90 million since the crash in 2008, and there hasn’t been a licence fee increase in a decade. She estimates that licence fee evasion costs it €36 million a year.

It’s quite a turnaround in fortunes for the Irish broadcasters. For years, TV3 was regarded as low-rent and many sneered at the quality of its sports coverage.

Under new owners, it has put together a strong portfolio of rights, while improving its production values and hiring top pundits. Forbes needs to review her tactics if RTÉ is to stay in the game.