RTÉ ‘digital lab’ to step up Player commissioning from January 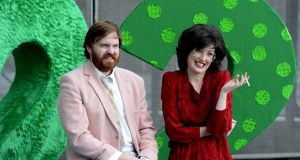 RTÉ’s “digital lab” for commissioning short-form content for the RTÉ Player will be in operation from January, according to the broadcaster’s head of online Aoife Byrne.

A long-planned upgraded version of the RTÉ Player, expected to be available from next week, will put a greater emphasis on content commissioned specifically for the platform, while some of the new series will be paid for through brand partnerships, Ms Byrne said.

They will include a travel series, presented by 2fm breakfast host and Bridget & Eamon actor Jennifer Zamparelli, made as a result of a commercial arrangement between RTÉ and Aer Lingus.

Ms Byrne told the Mediacon television and content event in Dublin on Friday that the new Player had been “a massively ambitious project to get over the line” and that the original Player-only series would be aimed at 15-34-year-olds, who are less likely to have a television set or traditional pay-TV package.

“Our audience comes to us for catch-up TV, but we know that they want more than catch-up TV,” she said.

“It’s not about RTÉ trying to do a ‘dad dance’ and keep up with the kids.”

Independent production companies will be paid for commissioned content according to RTÉ’s existing terms of trade, on a pro-rata basis. Running times are likely to be shorter than they are for traditional programmes, but Ms Byrne hinted at flexibility on formats.

Some 60 per cent of the Player’s current audience is under the age of 45 and the average amount of time spent on the platform is 20 minutes.

Last year marked the first time RTÉ put an entire series – mockumentary The School – online before it was broadcast on a linear channel (RTÉ2), while previous branded content on the Player include The Good Room, an interiors series backed by Dulux.

Ms Byrne said RTÉ would work with advertisers to introduce less intrusive advertising formats within the Player, but she added there was “no silver bullet” for revenue.