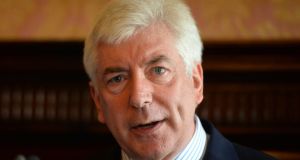 RTÉ “is not yet out of the woods” financially despite breaking even last year, its director-general Noel Curran has said.

According to its annual report for 2014, the public service media organisation collected more in commercial revenues than it had the previous year, but its licence fee income declined.

Minister for Communications Alex White hailed a “stable” performance by the broadcaster in light of falling licence fee income and “the challenging and increasingly fragmented market in which it operates”.

The small net surplus of €200,000 for the year, effectively a break-even position, comes on top of a €700,000 net surplus in 2013. Prior to that, RTÉ recorded a financial deficit for four consecutive years.

“The market isn’t getting any easier and I think we all need to realise that,” Mr Curran said in a video statement. “We’re not out of the woods yet by any means, but this is another positive step forward for us.”

Mr White said it remained his intention to bring forward legislation to address the high level of television licence fee evasion - a thorny issue for the broadcaster. At least 15 per cent of households and businesses liable for the charge are thought evade it, resulting in the loss to the media sector of some €30 million.

“The current television licence fee system is inefficient. It’s not fit for purpose, and it’s certainly not fit for the way audiences and the population consume media in this current age,” said RTÉ chief financial officer Breda O’Keeffe.

The loss of income leads to “reduced investment across the board”, meaning it affects the independent production sector as well as RTÉ itself, she added.

“Evasion levels in Ireland are over three times higher than those experienced in the UK and Germany and collection costs are more than double compared to other European counterparts,” RTÉ’s annual report says.

In recent times, the Government has moved away from the idea of shaking up the collection system or replacing the fee with a new household-based public service media charge. It has focused instead on a plan to introduce legislation that will give An Post the power to access the customer data of commercial television platforms such as Sky, UPC and Eircom.

RTÉ attributed the increase in its operating costs, which follows a sustained period of budget slashing, to an increase in television output, including the cost of broadcasting the World Cup in Brazil.

RTÉ’s advertising revenues continue to grow throughout 2015, it is understood. However, both the modest improvement in its commercial fortunes and its expectation that competition for audiences will toughen further in the future have reinforced its desire for more clarity on the public side of its funding.

“We have not had any licence fee increase since 2006 and we need some sort of certainty around our public funding,” Mr Curran said.

Moya Doherty, the chair of the RTÉ board as of earlier this year, said the introduction of a secure funding basis for the future was “a priority concern”.

A breakdown of the €160 licence fee shows that some €127.03 of it is spent on RTÉ activities, with the rest going to TG4, the Broadcasting Authority of Ireland and An Post’s collection costs.

A slightly bigger chunk of each fee collected went on RTÉ’s television services and slightly less was spent on radio last year compared to 2013.

The cost of funding the RTÉ Orchestras, meanwhile, accounts for €8.60 of each licence fee.

1 Majority of employees don’t want to return to pre-Covid working patterns
2 ‘My rent here is so low it’s a joke’
3 If tourists are such pariahs should we not be testing them on arrival?
4 Investors in Irish solar energy fund in line for €20m payout
5 Varadkar and Donohoe to meet banks to discuss mortgage breaks
6 Tobacco giant’s menthol-ban substitutes take 5% share of Irish market
7 Norwegian airline sued in Dublin by inflight caterer
8 Companies cutting IT investment when they need it most, warns PwC report
9 ‘I set up an investment club many years ago with a bunch of friends’
10 Goodbody’s planned €155m sale to Bank of China falls through
Real news has value SUBSCRIBE

Government should set a benchmark for any permanent increases in spending 05:50
Norwegian airline sued in Dublin by inflight caterer 05:37
Homeworking is depriving me of juicy gossip 05:30
Companies cutting IT investment when they need it most, warns PwC report 05:30
‘I set up an investment club many years ago with a bunch of friends’ 05:20
Search executive
jobs on irishtimes.com