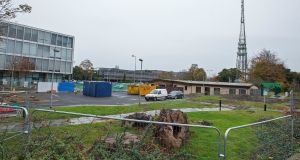 Construction work has begun at RTÉ’s Montrose campus to create a new entrance on to the Stillorgan Road. The former creche building, seen to the right, will be demolished. Photograph: Dave Meehan

The construction of a new entrance to RTÉ’s site at its Montrose campus in Donnybrook in Dublin is under way and will be completed in the early months of 2018.

The new site entrance from Stillorgan Road will become the main point of access to RTÉ, replacing the existing vehicle entrance on Nutley Lane, which will become a pedestrian and bicycle entrance. Dublin City Council is expected to install traffic lights at the newly created access junction in the new year.

The work, which will include the demolition of a creche built nine years ago, is being carried out by the broadcaster ahead of a major residential development by property group Cairn Homes on the adjacent land.

RTÉ said its creche facility has now relocated to the protected Montrose House building. “The move from the existing creche structure was essential to allow for the construction of a new site entrance from Stillorgan Road as part of the ongoing redevelopment of RTÉ’s Donnybrook campus,” it said.

The new entrance will alleviate congestion at the junction of Nutley Lane and Stillorgan Road and “enhance traffic safety”, according to RTÉ.

The National Transport Authority initially objected to the new entrance plan on the basis that direct access to and from RTÉ on to the Stillorgan dual carriageway would itself cause congestion and introduce “an additional delay point” on a public transport corridor. It later indicated to Dublin City Council that it was satisfied with the further information RTÉ provided on the plan and planning permission was granted.

RTÉ sold 8.64 acres of its Montrose campus to Cairn Homes for €107.5 million earlier this year, with the sum far exceeding the guide price of €75 million.

The set of Fair City, which is based on part of this land, is expected to be relocated to the northeastern part of the RTÉ campus adjoining the boundary with properties on Nutley Road.

RTÉ wants to build a wall, two fences and a “landscaped screen” to enclose the set of the soap opera, according to a planning permission notice on site.

The land sale has enabled RTÉ to launch a voluntary redundancy and early retirement scheme designed to gets its finances on a more sustainable footing. RTÉ employees whose applications to the scheme have been approved have until Friday to accept the offer.

The broadcaster declined to say how many offers it had made. However, it is understood that applications for redundancy or early retirement fell short of RTÉ’s 250 target. Some applications have also been turned down, while the decision is pending in the case of another group.

The majority of those who accept an offer will leave the broadcaster, which employs about 2,000 people, before the end of 2017.

1 Irish people like nothing more than being bribed with their own money
2 Seán FitzPatrick’s new Greystones’ home plan runs into privacy issues
3 GoMo is being investigated by advertising authority
4 Fast-growing frozen food group has a strong appetite for success
5 Exploration group claims shares traded in breach of regulatory rules
6 Pointy sale: How a Google reject built a $160m company and sold it to Google
7 Hogan warns Britain on US trade deal as EU set to impose tariffs
8 Election adds to headaches for AIB boss Colin Hunt
9 The Irish economy is thriving but if you’re not feeling it – here’s why
10 Being in Nama regarded as stigma in UK, O’Flynn tells court
Real news has value SUBSCRIBE