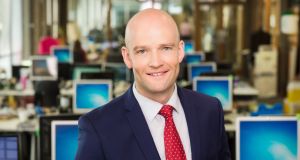 RTÉ has appointed Brian O’Donovan as its new Washington correspondent from January 2018. He replaces Caitríona Perry, who is moving to become the co-presenter of RTÉ’s Six-One news bulletin alongside Keelin Shanley.

O’Donovan joined RTÉ in 2015, reporting across television and radio news. He worked for TV3 News for 10 years before that as a news reporter, finance correspondent and documentary maker.

He began his broadcasting career with Red FM in Cork, where he is from, after studying communications in Dublin City University.

O’Donovan has reported on major international news stories, including the aftermath of the Nice terror attacks, the Syrian refugee camp crisis and the Catalan independence protests in Spain.

He described the Washington posting as “a dream job”.