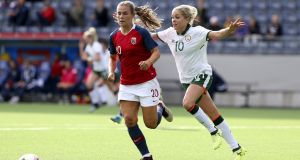 When TG4 broadcasts the opening match in the Fifa Women’s World Cup (WWC) between host nation France and South Korea next Friday, it should mark the start of a new era for Irish coverage of the event, as well as a massive leap forward in the media status commanded by women’s sport.

For the first time, each of the 52 games will be shown on Irish television, with matches split between RTÉ2 and TG4.

To date, RTÉ’s only live coverage of the WWC was the 2007 final between Germany and Brazil, which was shown online in the early days of streaming for the broadcaster. It did not acquire the rights to either the 2011 or 2015 tournaments.

“There is a desire out there to see more women’s sport,” says RTÉ group head of sport Declan McBennett, who describes the Irish women’s hockey team’s performance in their world cup last summer, watched on RTÉ by an average of 381,500 people, as “a seminal moment”.

With the popularity of women’s soccer fast on the rise, the French stadiums are expected to be full, contributing to the atmosphere of the broadcasts, says McBennett. He expects audience awareness of the tournament will grow over the month despite the absence of an Irish team.

“Women’s football is on the cusp of something great,” says McBennett. “I think we have gone beyond the toe in the water or the question of whether people will watch it. The only question is what is the scale of their interest?”

RTÉ’s full line-up of pundits and commentators will be announced at a special launch on Tuesday, but Jacqui Hurley, who will anchor RTÉ’s coverage in rotation with Darragh Moloney and Peter Collins, says it will “look and feel like the men’s World Cup” of 2018.

Not having had the chance to see women playing football on television when she was growing up, Hurley is pleased that this generation of players will be able to inspire young girls today. The standard of the game has also improved massively in recent years, she says, highlighting the quality of the Champions League final that saw Lyon beat Barcelona.

Hurley says the Republic of Ireland were unlucky to be drawn with relative giants Norway and the Netherlands in their qualifying group, in which they finished third, failing to make the finals. She fancies their chances in the upcoming qualification campaign for the Uefa Women’s Euro 2021, which will be held in England.

“I think they’re getting very close to qualifying for a major tournament.”

Sponsor interest in the eighth WWC has soared, while world governing body Fifa has doubled the prize money to some $30 million (€27 million) – though that is still just a fraction of the $448 million pot at last year’s men’s tournament in Russia.

The US, three-times winners and current title holders, are favourites to be crowned champions again this year. The team hit the headlines for off-pitch reasons in March when it sued the US Soccer Federation for gender discrimination, saying the national body paid them less than the men’s team despite their superior performance and provided them with substandard facilities.

“Everything they’re going through off the pitch is only going to strengthen them,” says Hurley.

“I like England’s chances, I have to say,” she adds, noting that, like its men’s team, England’s women have had their share of heartbreak in the past.

Although RTÉ are the primary rights-holders, schedule clashes with its commitments to GAA matches and other programming mean more WWC games will actually be on TG4.

“We sat down with their schedulers and worked it through, game by game,” says McBennett.

Both RTÉ and TG4 have backed the 20x20 “if she can’t see it, she can’t be it” initiative devised by creative agency Along Came a Spider and adopted by the Federation of Irish Sport. Among its aims are a 20 per cent increase in media coverage of women’s sport by the end of 2020.

“Our commitment to women’s sport will intensify,” McBennett promises.

Of course, it helps that some of Ireland’s leading sports personalities are female, with the most famous of them, Katie Taylor, attracting 1.1 million viewers to her gold medal winning fight at London 2012. Audiences of this size on Irish television are rare.

“There’s definitely been a change in the last few years,” says Hurley of the wider attention paid to women’s sport. She also cites “a concerted effort” to avail of female experts in broadcasters’ coverage of men’s sport.

“There are still things we can do better, but it is improving,” she says. For now, she’s looking forward to “amazing stories and amazing football” in France.