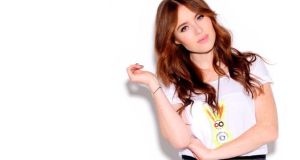 Style journalist Angela Scanlon (of Oi Ginger!) is set to be promoted as “new” RTÉ face

In the grand but pock-marked scheme of Ireland’s national broadcaster, RTÉ Two has always been something of an entertainment sideshow: a big football match here, a hit import there – popular, but not as much as TV3, and distinctively Irish only in fits and spurts.

RTÉ One’s current affairs stalwarts (those who remain in its employ) and a clutch of Love/Hate cast members (those whose characters are still alive) may have been on hand to pose for cameras at Montrose yesterday, but RTÉ Television’s new season launch was really the story of RTÉ Two.

After years of underinvestment, money has been diverted to the task of whipping the second channel into a punchy BBC Three-ish shape. Under new channel controller Bill Malone, it will step up its focus on the under-35s, with a licence from managing director of RTÉ Television Glen Killane to take risks.

Comedy is one such risk. This autumn, RTÉ Two has comedy-drama to add to daft satire Republic of Telly and the impressionist sketches of Mario Rosenstock. Sitcom The Centre, starring Katherine Lynch, and Damo & Ivor, featuring Rik Mayall (one for the upper reaches of the target demographic), may not be to everyone’s taste, but setting out to please everyone all of the time is not the point.

“Comedy is very expensive, it’s very high-risk, you can get it horribly wrong, and the rewards are not necessarily so massive. But you look to when you get it right,” says Malone.

Reality Bites, RTÉ Two’s eight-part “popular documentary” strand, passes what he calls “the Reeling in the Years test” of public service broadcasting, in that it yields footage that, if later edited into a Reeling in 2013-style programme, would reflect the here-and-now of modern Irish life. “It’s a window and a snapshot - warts-and-all, non-judgmental – into what Ireland is like.”

Of more immediate importance is the fact that Reality Bites presenters, such as style journalist Angela Scanlon (of Oi Ginger!), are set to be promoted as “new” RTÉ faces at a time when it could do with a few.

Maia Dunphy, veteran of the Reality Bites strand, this time around gets her own series, Maia Dunphy’s What Women Want, addressing topics such as ageing, anxiety, modern families and sexuality – “not Fifty Shades of Grey, not Sex and the City, we’ve had all that swinging from the chandeliers”, but sex “post-baby”, sex when you’re tired.

“I wouldn’t dare to presume to answer the question what do women want,” says Dunphy. “What I try to do is create a casual conversation about a serious subject. So it’s not Prime Time, but it’s the kind of things women talk about over a cup of tea, or a glass of wine.”

Over on RTÉ One, the old reliables, save axed restaurant drama Raw, will be back on screen, but there will be some subtle innovations too.

This year’s Rose of Tralee, for example, will offer Rose fans “behind-the-scenes” content online during the usual frock-free break for the 9 o’clock news bulletin, while RTÉ One controller George Dixon hints at “stunty” scheduling for missing girl drama Amber.

“It’s all about reinvention,” Dixon says.

“In my job, you have got to always find the new, because people get bored very quickly in a market where other channels can copy what you do, and do it very cheaply, and something that was special is no longer special, because there are 50 different versions of it.”

Killane had an even more grim vision of what might happen if RTÉ doesn’t evolve. “The business world is littered with companies that failed to embrace change and recognise when it is necessary – just think of Kodak or Nokia,” he said, noting wryly that “change is a little bit of a theme for RTÉ right now”.