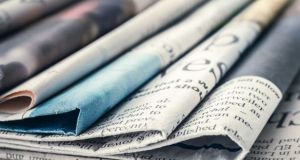 It’s tough times for all businesses right now and the media industry is no exception. On Monday, Daily Mirror-owner Reach, which also owns the Daily Star and Express titles, said it would furlough 20 per cent of staff and cut wages by 10 per cent due to the Covid-19 crisis.

Over the past week, we’ve seen similar moves locally from Iconic Newspapers and Celtic Media Group, as well as Journal Media and the Denis O’Brien-owned Communicorp.

In an age of fake news and misinformation, the need for accurate information has never been more critical. But key questions remain over who will pay for it, particularly at a time when advertising revenue has collapsed. Marketing communications group Core recently forecast that the local ad market would collapse by about 30 per cent this year, equivalent to more than €300 million in lost revenues.

It isn’t all bad though. A study just published by the World Economic Forum shows that as many as 53 per cent of people may be willing to pay for news in the future, up from just 16 per cent currently.

The study also finds that young people aged between 16 and 24 are twice as willing to cough up for such content than those aged 55 or over.

According to WEF, the fact that the public are at least open to paying more for news suggests that media companies are in a good position to prove value to greater numbers of people.

“The current coronavirus challenge only emphasises the indispensable role that media play in society today. With the value of content growing, the industry needs financial models that enable them to fulfil their social functions while still supporting widespread access to critical content,” said Kirstine Stewart, head of shaping the future of media at the forum.

Increased sales by themselves won’t save the media but it offers some hope for the future of the industry.