Broadcaster tells Oireachtas committee that process of cutting pay 'not over' 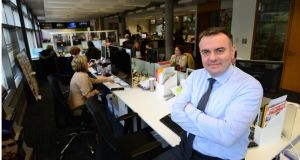 No presenter at RTÉ wouldbe paid over €500,000 by the time this year’s contract negotiations are completed, the broadcaster’s director general Noel Curran said today. Photograph: Bryan O’Brien / The Irish Times

No presenter at RTÉ would be paid over €500,000 by the time this year’s contract negotiations are completed, the broadcaster’s director general Noel Curran said today.

The average pay of the top ten pool of the company’s broadcasters would be €280,000 by the end of this year compared with€444,000 average in 2008, Breda O’Keeffe RTÉ acting chief financial officer told the Joint Oireachtas Committee on Communications. “Negotiations are not finished,” she said.

Mr Curran said top presenters had been paid too much during the boom when earnings “became overly inflated”. The average reduction across the top ten earners would be close to 40 per cent after contract negotiations, he said.

However he said the process of cutting pay was not over. “As contracts expire we will of course review the fee levels ,” he said. While fees were too high “you do need to recognise the value of RTÉ presenters,” he said.

Sinn Féin TD Dessie Ellis raised concerns that top earners were being paid through companies to “avail of tax breaks” and did not “pay the same tax” as most people. If a presenter has a limited company or is a sole trader it is “their responsibility” to return their taxes, Ms O’Keeffe said. RTÉ insists that contractors have tax clearance , she added. The broadcaster wants an ability to end a contract of its “talent” and tax was a “revenue issue”, Mr Curran said.

“Is it fair that the public broadcaster is facilitating people not to pay the same tax as everyone else?” committee chairman Tom Hayes asked.

The committee also heard that RTÉ was keeping coverage in London “under review” after a question from Labour TD Ann Phelan on the closure of its bureau last year. Managing director of RTÉ news and current affairs Kevin Bakhurst said looking at the London operation was “high” on the list of areas RTÉ might revisit. It was keeping London coverage “under review” particularly with the referendum on Europe, Mr Bakhurst said. He had spoken to the BBC about sharing premises but the response was “not very positive”, he said.

The decision to close the London office had been “right” at the time it had been in an “extremely expensive” are and operating “in a particular way”, he said. If it had not been closed the broadcaster may not have been able to maintain a presence in the regions, he added.

Mr Bakhurst hopes to move three of RTÉ’s regional offices to institutes of technology at Dundalk, Waterford and Athlone by year end.

The meeting also heard that RTÉ’s budgetary cuts could hit is buying of sports rights . RTÉ’s strategy was to reduce sports costs by 25 per cent by 2015 so there “may be further losses”, Ms O’Keeffe said.

The broadcaster awaits a review on its future public funding by the Broadcasting Authority of Ireland which would be made “in the coming days”, Mr Curran said.

2 Trade with Britain will not return to pre-Brexit model, exporters warned