Get back in the queue, says one Minister of RTÉ’s requests for funding 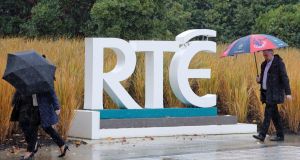 In public most politicians and the people who work for them are enthusiastically supportive of RTÉ. They praise the station’s output. They like to be seen with what RTÉ used to call “Ireland’s best-loved personalities”. Tributes to Gay Byrne gushed out of them in recent days. They pay lip service to the idea of public service broadcasting.

In private, though, it is often a different matter. “Most politicians don’t have a good word to say about RTÉ,” says one Cabinet Minister.

“RTÉ thinks the public love them,” says a senior official. “But they don’t.” And therefore, he adds, politicians don’t care about RTÉ.

Many conversations on Thursday with Ministers and officials, from this Government and previous ones, have demonstrated very little sympathy for RTÉ’s predicament.

At Cabinet level, there is little or no sense that RTÉ’s needs will be given priority. In fact, the sense is very much the opposite.

For their part, many journalists and senior management in RTÉ cling to a comfortable but deluded fiction. They think politicians make a distinction between the news and current affairs coverage they may find uncomfortable and the necessity to preserve and fund RTÉ’s journalism and public service mandate.

But in many cases – most, perhaps – politicians don’t make that distinction. They see negative coverage – and all politicians think that most coverage of them is negative – and they think, as one senior official says, “f***ing RTÉ”. Then RTÉ comes looking for money from them.

“They can get back in the queue,” says one Minister.

Politicians tend to take things personally. One Minister, continually vexed by RTÉ’s news stories on the shortcomings of public services, remarks with barely disguised relish that “because of its own programmes”, the station would be aware of the many pressing demands on the public finances.

RTÉ demands for money are contrasted with what politicians in all parties believe are inefficiencies in Montrose and unjustifiably high pay to RTÉ’s stars. Interviewed on Morning Ireland on Thursday, it took Minister for Business Heather Humphreys just three minutes to mention the top salaries in RTÉ – “some workers in RTÉ who are paid more than the Taoiseach, than the prime minister of the UK, and the President of America”.

Hostility between the broadcaster and government is nothing new. Seán Lemass thought RTÉ should be an arm of the State. Gerry Collins, when he was a Fianna Fáil minister for posts and telegraphs in the 1970s, sacked the entire RTÉ Authority.

Fianna Fáil governments tended to believe RTÉ was populated by left-wingers. By and large, this was true. But when Labour was in government in coalition with Fianna Fáil, the coalition governments felt even more victimised by RTÉ’s coverage.

In Fine Gael there is a belief that RTÉ unfairly lacerated the last government at a time when it was struggling to save the country from financial collapse. That belief was at its height during the protests over water charges, for which ministers in that government (some of whom are in office in this one) believed that RTÉ’s reports were acting as cheerleaders.

An irony that several people pointed to is the fact that it was the furious public reaction to water charges that killed off the broadcasting charge that would have helped the station’s financial problems.

To compound the difficulties, the view in Government is that RTÉ’s approach to the current restructuring plan has been unfocused and inept. There are obvious strains between the executives and the board.

“Government is used to public bodies looking for money. RTÉ is by far the most useless public body I’ve seen at it,” says one insider.

Several politicians and senior officials cited the lack of a “champion” in Government. “They have no friends,” said one senior figure.

More constructively, many sources contrasted the approach of An Post – another State body with desperate financial needs recently but which underwent a painful restructuring and persuaded Government to back it with a big funding increase. RTÉ has, to date, done neither.