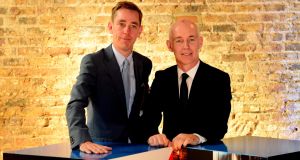 Ryan Tubridy has lost 32,000 listeners over the past year, while Ray D’Arcy has lost 21,000, the latest figures show. Photograph: Cyril Byrne/The Irish Times.

Key RTÉ Radio 1 programmes Marian Finucane, Today with Sean O’Rourke and The Ryan Tubridy Show were the main fallers in the latest radio ratings, while breakfast programmes were among the best performers.

The Joint National Listenership Research (JNLR) for the year to the end of March suggests that Finucane’s Saturday show has seen its listenership decline by 35,000 to 324,000 since the last survey, published in February.

Radio 1’s Liveline, Ray D’Arcy and Ronan Collins have also been tracking downwards on an annual basis, as has Drivetime, although it only declined by 1,000 since the last survey and remains the leader in its highly competitive slot with an audience of 226,000.

Morning Ireland and News at One are holding up better, with both shows gaining listeners since the last survey, as big news events such as Storm Emma lured in a higher audience. The breakfast programme, which saw the addition of Bryan Dobson to its presenter roster last autumn, now has 431,000 listeners, up 8,000 since the last survey, but down 10,000 year-on-year.

‘Work to be done’

Tom McGuire, head of Radio 1, said this survey was “a bit of a curate’s egg, I suppose”, with news and sport doing better than the rest. “There is work to be done with Ryan and Sean,” he said, but he was less concerned about Finucane’s losses, citing the tendency of weekend JNLR numbers to make big swings.

Mr McGuire compared Radio 1’s slippage to that of the Liverpool soccer team, which having gone 5-0 up against Roma in the Champions League this week, then conceded two late goals, narrowing its first-leg advantage.

Radio 1 remains the single biggest station by some distance, but its market share fell from 22.2 per cent to 21.5 per cent.

“I think competition is good for all of us,” Mr McGuire said.

Communicorp-owned station Newstalk also recorded gains for its breakfast show, which added 7,000 listeners to 126,000 in this survey and is up 10,000 annually.

Ivan Yates was up 6,000 listeners and has an audience of 145,000 for drivetime show the Hard Shoulder, which is 15,000 higher than Newstalk had for this time slot a year ago. In mid-morning, Pat Kenny restored some of his recent losses and is flat year-on-year at 148,000.

This helped Newstalk to its highest-ever national market share at 6.6 per cent, up from 6.3 per cent.

There was little change on RTÉ 2fm’s weekday performance and the station’s market share was flat at 6.8 per cent.

“What we’re doing here at 2fm is about Irish content, and that’s why Irish radio is strong. Local content will win. It’s winning now,” said head of 2fm Dan Healy. While there has been “some erosion” in the 15-34-year-old age group, overall radio’s popularity is “rock solid”, he said.

About 16,850 people were interviewed about their radio habits by Ipsos MRBI over the course of 12 months for the survey.

Local and regional radio, as a whole, is more popular than national radio and has now extended its lead to a 55.4 per cent share of all minutes listened.

Choose Radio, a group that represents the radio industry on advertising, urged advertisers to consider the listening habits of their target audience as they allocate their ad budgets throughout 2018.

Gabrielle Cummins, the chief executive of south-east station Beat 102-103 who chairs the group, said the JNLR figures “provide a clear indication of what the audience is actually listening to each day”.

JNLR listenership figures for April 2017 to end of March 2018

1 We are ‘sale agreed’, but can we go back with a lower offer?
2 Working from home: New costs, new stresses and little relief
3 Eason to lay off 150 staff as it prepares for June reopening
4 Joint accounts: if one of us dies, can the other access the money?
5 ESB shelves plan for €500m electricity generator at Poolbeg
6 HSBC board rethinks overhaul and seeks even deeper cuts
7 Ryanair almost certain to oppose German government’s bailout of Lufthansa
8 ‘Over 1,000’ pubs have interest in Covid-19 insurance test case
9 Covid-19 has turned the volume up on musicians’ cut from streaming
10 Aryzta’s revenue falls 24% as pandemic hits business
Real news has value SUBSCRIBE