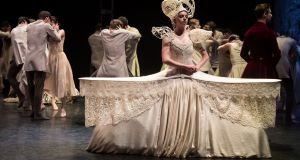 English National Ballet’s ‘Giselle’ at the Bord Gáis Energy Theatre – one of the shows driving a strong performance by the theatre this year. Photograph: Ian Gavan/Getty Images

Major productions of Miss Saigon and Hairspray helped the company that owns the Bord Gáis Energy Theatre in Dublin’s south docklands record an operating profit of €683,000 on turnover of €8.4 million last year, according to its latest set of accounts.

This was in line with the performance of the theatre in 2016, according to financial statements for Crownway Entertainment Ltd. The directors described it as a “strong” year of trading, with almost 500,000 people attending shows in 2017.

The theatre earned €6.5 million from ticket sales and “other” revenue, and just under €1.9 million from the sale food and drinks.

Some 37 staff were employed on average last year, with payroll costs rising by 13 per cent to €1.6 million. Trevor Bowen was the only director who was remunerated during the period, receiving a fee of €50,000.

Crownway recorded Ebitda (earnings before interest, tax, depreciation and amortisation) of €1.7 million, up marginally on 2016, and closed the year with €3 million in cash.

It is understood the strong trading momentum has continued into 2018, with shows such as Giselle by the English National Ballet, the Sound of Music, Matilda, and Wicked drawing large crowds.

Advance bookings for Les Misérables, which starts its run on December 5th, are believed to be particularly strong.

The company’s administrative expenses, including Live Nation’s management contract, rose by 3.5 per cent to €6 million during 2017.

It was also a year in which Crownway acquired the freehold of the theatre from Dublin City Council. The theatre was purchased by Crownway in 2014 for €29.1 million.

Crownway is a private equity group owned by businessman John Gallagher and his wife Bernadette, a daughter of the late hotelier PV Doyle.

Entrepreneur Harry Crosbie opened the theatre in 2010 but lost control of the property after his loans were transferred to Nama in 2013.

Global music events and venue operator Live Nation operates the 2,111-seat venue and Crownway recently extended the naming rights deal with Bord Gáis out to 2026 on improved terms. The original 6½-year deal had been valued at about €4.5 million.